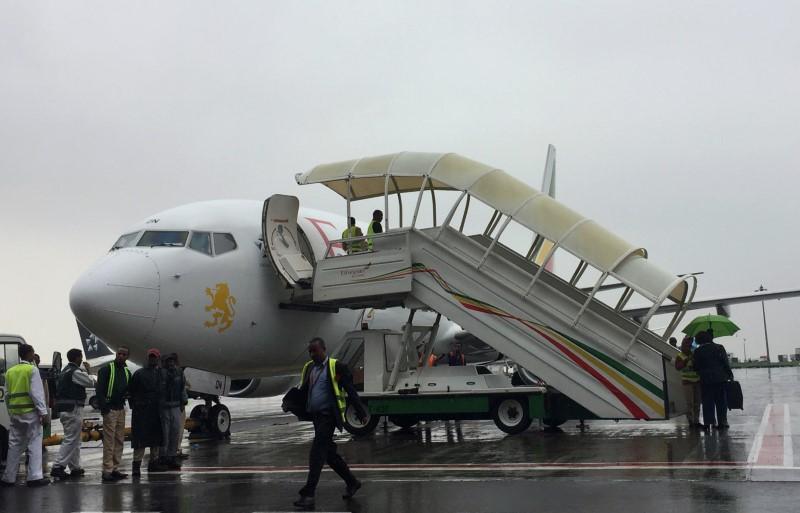 ADDIS ABABA (Reuters) – The first commercial flights from Ethiopia to Eritrea in 20 years took off early on Wednesday, sealing a stunning reconciliation between the former enemies a week after they ended their military standoff.

Families separated from loved ones by the conflict queued up with dignitaries to board two Ethiopian Airlines [ETHA.UL] jets in Addis Ababa – many of the passengers waving flags and wearing t-shirts with slogans celebrating the rapprochement.

Senait Tesfaye told Reuters she had not seen her grandmother Abrehet for more than two decades. “We have been longing to see her for all these years,” she said as she cradled her three-month-old son Naby.

“He will now get to spend time with her more than I ever did as a child. Words cannot express the joy we feel as a family,” said the 37-year-old. Abrehet, she said, was deported to Eritrea alongside tens of thousands of Ethiopian residents of Eritrean origin at the start of the conflict.

A Boeing 787 with 315 people on board and a 737 with 154 passengers took off under rainy skies and were due to land in Eritrea’s capital Asmara about one hour and 25 minutes later.

The flights cemented peace efforts pushed by Ethiopia’s new prime minister Abiy Ahmed, who came to office in April and announced a series of reforms that have turned politics on its head in the region.

With the 41-year-old former intelligence officer at the helm, the ruling coalition has ended a state of emergency, released political prisoners, restored phone links and announced plans to partially open up the economy – including letting foreign investors take stakes in state-run Ethiopian Airlines.

An Ethiopian Airlines pilot stands near a banner advertising the Asmara route during a ceremony at the Bole International Airport in Addis Ababa, Ethiopia July 18, 2018. REUTERS/Tiksa Negeri

The airline – which operates Africa’s biggest fleet – now stands to save millions of dollars a year by using Eritrean airspace instead of taking circuitous routes to some middle eastern destinations, its chief executive, Tewolde Gebremariam, told Reuters.

“This is a big occasion for us,” he said.

In his boldest move, Abiy offered last month to make peace with Eritrea, 20 years after the neighbors started a border war that killed an estimated 80,000 people.

Full-blown fighting had ended by 2000, but their troops have faced off across their disputed frontier ever since.

Abiy has since visited Asmara and Eritrean President Isaias Afwerki reopened his nation’s embassy in Addis Ababa on Monday.

Abiy’s predecessor, former prime minister Hailemariam Desalegn, told Reuters on board one of Wednesday’s flights that he felt “heartfelt joy”.

“There has been hatred between us for the last twenty years – now that has been reversed,” he said.

The countries barred their citizens from visiting each other during the conflict. Foreigners wanting to travel from one country to the other had to connect in a third country.