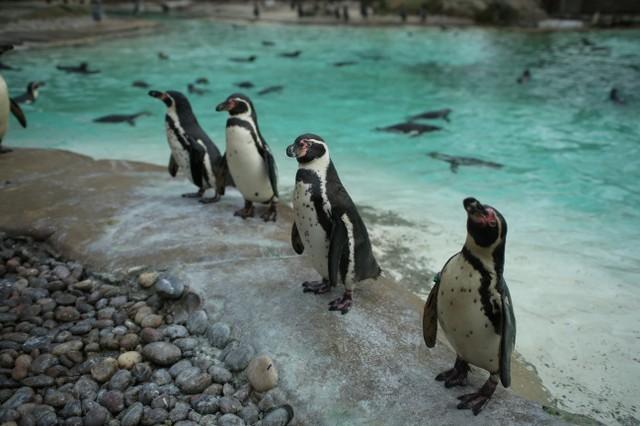 LONDON (Reuters) – Keepers at London Zoo have managed to save a tiny penguin chick named Rainbow after its parents accidentally cracked its egg before it had hatched.

After realizing the chick was still alive, they removed bits of shell with tweezers and moved it to an incubation room.

“We were overjoyed when she started begging for food by opening her mouth wide and making tiny squawks. It was the first sign that she might just make it,” said penguin keeper Suzi Hyde.

Rainbow spent the next few weeks cozying up to a cuddly toy penguin under the warming glow of a heat lamp and being hand-fed three times a day with what the keepers called “penguin milkshake” – a diet of blended fish, vitamins and minerals.

“Rainbow’s bodyweight has steadily increased by around 20 percent every day, so she’s growing extremely quickly,” said Hyde, adding that the chick was always eager for its next meal.

The one-month-old chick is expected to stay in the incubation room until she reaches 10 weeks, by which time she should have grown from 73g at hatch to around 3kg in weight.

“Penguins do accidentally step on their eggs, which – even if the chick survives – invariably leads to them rejecting the infant,” Hyde said.

But thanks to the keepers’ special care and the chick’s resilience, Rainbow is now expected to move to the zoo’s “penguin nursery” for swimming lessons and then join the 80 other penguins at their 1,500 square meter pool, the biggest in Britain.