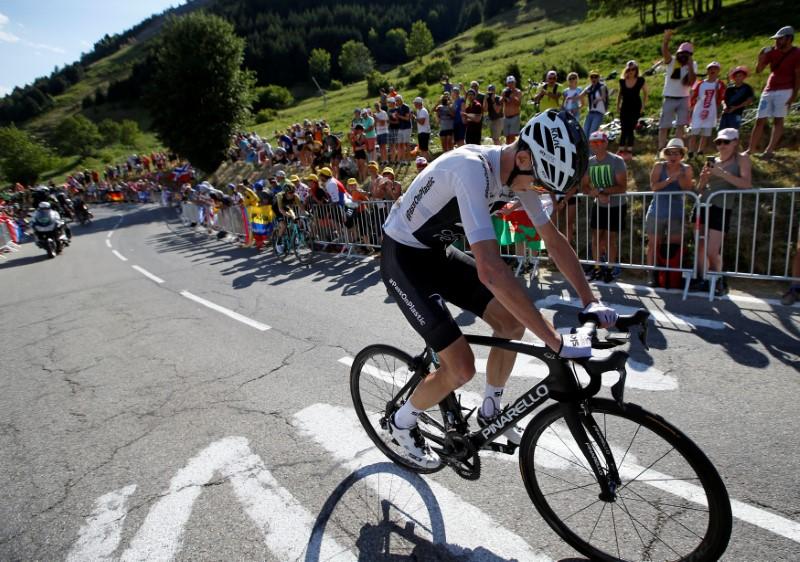 Race leader Thomas became the first rider to win on the iconic climb while wearing the yellow jersey but he could not enjoy his win at the podium ceremony as he was jeered and whistled at by the French crowd.

Defending champion Froome, who finished fourth, was also booed all the way up the 21 hairpins of l’Alpe d’Huez, and was even slapped on the shoulder by an angry spectator who ran alongside.

“I didn’t see that… If people don’t like Sky and want to boo, boo all you like, but let us race,” Thomas told a news conference.

“Don’t touch the riders, let us race, don’t spit at us, have a bit of decency. Voice your opinion all you want but let us do the racing.”

The Welshman, who won the Criterium du Dauphine last month, won the 12th stage with a late acceleration at top of the 13.8-km climb to beat Dutchman Tom Dumoulin and France’s Romain Bardet, while further extending his overall lead over his Sky team leader Froome.

Yet both he and Froome had to endure a hostile reception throughout the day, a pattern that has emerged since the teams’ presentation in the Vendee region two weeks ago.

Team Sky, whose domination is reminiscent of that of Lance Armstrong’s U.S. Postal team in the early 2000s, have been largely unpopular in France. Froome, who won the Tour in 2013, 2015, 2016 and 2017, was cleared of a doping offense just before the start of the race after he tested positive for excessive levels of an anti-asthmatic drug during last year’s Vuelta.

As shocking as they might seem, the unsavory scenes were nothing new on the Tour.

In 1975, the great Eddy Merckx was punched in the stomach by a spectator on a climb as he was racing against popular home rider Bernard Thevenet, who ended up winning the race well ahead of the Belgian.