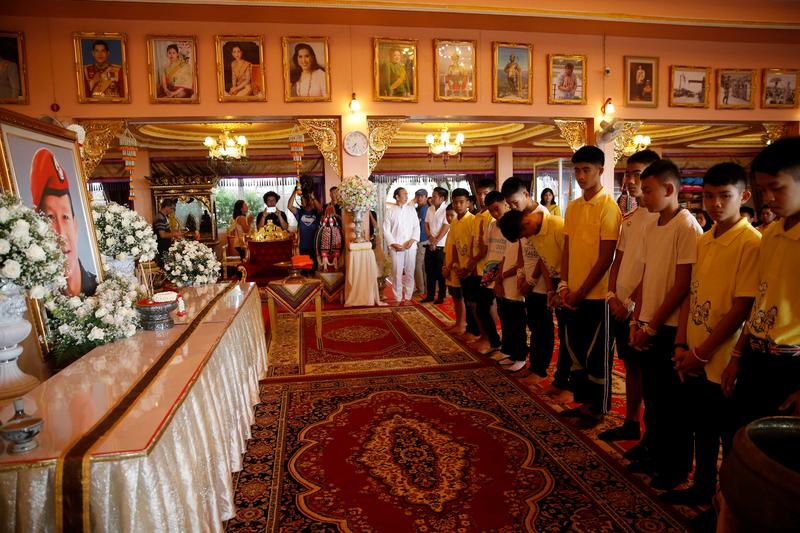 CHIANG RAI, Thailand (Reuters) – Thailand’s rescued cave boys woke up in their own homes for the first time in more than three weeks on Thursday, with many rising at dawn to take part in a religious ceremony.

The 12 boys, aged 11 to 16, and their 25-year-old coach were discharged from a hospital in the northern province of Chiang Rai on Wednesday and later made their first public appearance.

During a national TV broadcast they smiled, joked and showed solidarity with one another, as they shared details of their traumatic experience inside the flooded Tham Luang cave complex.

Many of the boys hail from the sleepy district of Mae Sai, near the border with Myanmar. Some were greeted with hugs, tears and smiles from waiting relatives and friends when they returned home on Wednesday. Others were blessed with water as they entered their homes.

On Thursday, some of the boys and their relatives took part in religious ceremonies at Mae Sai’s Wat Pha That Doi Wao temple – an ancient temple with scenic views of the surrounding countryside.

Reporters were not allowed close to the boys and their families at the temple to give them privacy.

Members of a soccer team rescued from a cave pay respect to former Navy SEAL diver Saman Kunan who died during the rescue operation, in a temple at Mae Sai, in the northern province of Chiang Rai, Thailand, July 19, 2018. REUTERS/Soe Zeya Tun

The last of the group of 13 were brought out of the cave last Tuesday, ending a grueling 18-day ordeal that claimed the life of Samarn Kunan, a volunteer diver and former Thai navy SEAL who came to help with the rescue mission.

Samarn died on July 6 after losing consciousness during a mission to place oxygen tanks deep inside the cave, just two days before the first boys were brought to safety.

During their TV news conference the boys said when they entered the cave on June 23 they had planned to only be inside the cave for about an hour after soccer practice. But a rainy season downpour flooded the tunnels, trapping them.

The boys had no food and survived only on water. They took turns digging at the cave walls, hoping to find a way out.

“We drank water from stalactites. On the first day we were ok, but after two days we started feeling tired,” said Pornchai Kamluang, 16, adding that their coach, Ekapol Chanthawong, told them to stay still when possible to preserve energy.

“This experience made me stronger and taught me not to give up,” said the team’s youngest member, who goes by the name Titan.

The boys will eventually spend time as novice Buddhist monks to honor the dead diver’s memory, their coach said on Wednesday.