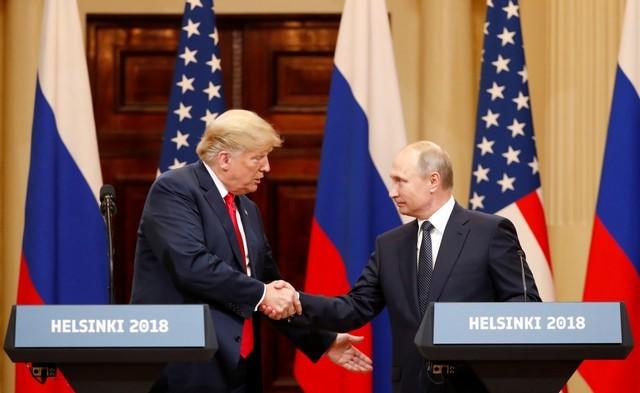 The Republican president then directed his national security adviser, John Bolton, to invite Putin to Washington in the fall, the White House said, four days after Trump held a summit with the Russian leader in Helsinki.

“President Trump asked @Ambjohnbolton to invite President Putin to Washington in the fall and those discussions are already underway,” White House spokeswoman Sarah Sanders said in a Twitter post.

Following their summit on Monday, Putin described the proposal when he was asked about the possible extradition of 12 Russian intelligence officers indicted in the United States on charges of meddling in the 2016 presidential election.

“It is a proposal that was made in sincerity by President Putin, but President Trump disagrees with it,” Sanders said in a statement on earlier Thursday. “Hopefully President Putin will have the 12 identified Russians come to the United States to prove their innocence or guilt.”

The White House issued that statement as the U.S. Senate prepared to vote on a resolution expressing congressional opposition to allowing any U.S. officials to be questioned by Russia. In a rebuke, the Senate – controlled by Trump’s fellow Republicans – went on to unanimously approve the resolution.

It was the latest about-face from the White House as it struggled to quiet an uproar over Trump’s failure to confront Putin over Russian meddling in the 2016 election. The White House had said on Wednesday that Trump was considering the proposal, drawing a barrage of criticism from Republicans and Democrats.

Trump on Tuesday said he misspoke during a joint news conference in Helsinki when he said he did not see why Russia would meddle in the election. On Wednesday, Trump answered “no” to a reporter’s question on whether Russia was still targeting the United States, only to have Sanders say hours later he was saying “no” to answering any questions – not to the question itself.

On Wednesday, the Russian Prosecutor General’s office listed Americans it wanted to question for “illegal activities,” including Michael McFaul, who was U.S. ambassador to Russia under Democratic former President Barack Obama.

“No president should have the power to gift-wrap American citizens, let alone former ambassadors, to our known adversaries,” top Senate Democrat Chuck Schumer said before introducing the resolution.

“I don’t think there is one member of Congress, on either side of the aisle, that believes it is remotely smart to require our former ambassador, Mr. Browder or any other person to submit to interviews by Putin’s government,” Republican Senator Lindsey Graham told reporters Thursday morning.

Earlier on Thursday, both Trump and Putin blamed forces within the United States for marring what they called the success of their first summit, with Trump saying he looked forward to their second meeting.

Trump accused the news media of distorting comments in which he gave credence to Putin’s denials of election interference despite the conclusions of the American intelligence community about Moscow’s conduct.

“The Summit with Russia was a great success, except with the real enemy of the people, the Fake News Media,” Trump wrote on Twitter.

“I look forward to our second meeting so that we can start implementing some of the many things discussed,” Trump said, citing terrorism, Israel’s security, nuclear proliferation, cyber attacks, trade, Ukraine, Middle East peace and North Korea.

In Moscow, Putin said “powerful” U.S. forces were trying to sabotage the summit’s achievements, but said he and Trump had begun to improve U.S.-Russia ties anyway.

“It was successful overall and led to some useful agreements” Putin said, without elaborating on the agreements.

Without naming names, Putin spoke of U.S. politicians who put their “narrow party interests” above the best interests of the United States and were powerful enough to be able to foist their questionable “stories” on millions of Americans.

Republican and Democratic U.S. lawmakers grappled with Trump’s conflicting statements about the summit as well as what they did not know: exactly what the two leaders discussed in their private meeting and what agreements, if any, were reached.

Republicans voted down a motion offered by Democrats in the House of Representatives intelligence committee to subpoena the American interpreter who witnessed Trump’s meeting with Putin.

American intelligence agencies last year announced their conclusion that Russia carried out a campaign of hacking and propaganda targeting the 2016 U.S. election in an attempt to sow discord, disparage Democratic candidate Hillary Clinton and aid Trump’s candidacy. Putin has denied any such meddling.

U.S. President Donald Trump walks from Marine One as he arrives on the South Lawn of the White House in Washington, U.S., July 18, 2018. REUTERS/Joshua Roberts