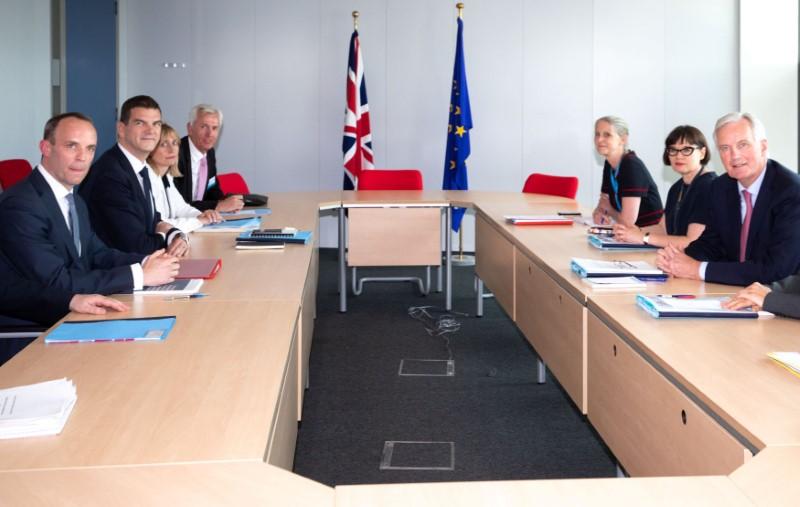 BRUSSELS (Reuters) – London’s new Brexit minister said he was confident he could reach a deal, on his first trip to Brussels on Thursday as the EU warned business to get ready for Britain crashing out of the bloc without agreed terms to cushion the economic disruption.

Brexit campaigner Dominic Raab, appointed to the government last week after his predecessor quit over Prime Minister Theresa May’s proposals to stay close to EU trading rules, said Britain was ramping up preparations for a “no deal” but focussed above all on selling her ideas to EU chief negotiator Michel Barnier.

The resignation of his predecessor David Davis and others, and May’s battles in parliament with pro- and anti-Brexit wings of her own Conservative Party, have led Brussels to wonder whether London is capable of agreeing any deal this year to avoid chaos when it leaves in March.

That, the EU’s executive European Commission insisted on Thursday, was not the reason for its warning on stepping up preparedness for a “no deal” or “cliff edge” Brexit.

Raab said Britain was on track and he would bring new “energy, vigour and vim” to talks as they get down to wire to find a deal before EU leaders meet at a summit in October.

“We’ve only got 12 weeks really left to nail down the details of the agreement, so I set out our proposals,” Raab said after meeting Barnier. “I’m sure in good faith, if that energy and that ambition is reciprocated, as I’m confident it will be, we will get there.”

EU officials and diplomats still think some kind of deal, including a 21-month status quo transition period to allow further talks, is more likely than not, if only because the cost for both sides would be so high.

The International Monetary Fund said on Thursday EU countries would suffer long-term damage equivalent to about 1.5 percent of annual economic output if Britain leaves without a free trade deal.

“While the EU is working day and night for a deal ensuring an orderly withdrawal, the UK’s withdrawal will undoubtedly cause disruption, for example in business supply chains, whether or not there is a deal,” the Commission said in a statement.

“Preparedness is not a mistrust in the negotiations,” an EU official added, saying big firms seemed to be advancing in their plans but smaller companies which had never traded outside the single market before would face challenges in their paperwork.

A senior British regulator also warned Britain’s banks and insurers on Thursday to plan for a “hard” Brexit.

Barnier is due to report back on his meeting with Raab to ministers from the other 27 EU states on Friday.

Ahead of talks with Raab, Barnier said the EU was offering an “unprecedented” partnership on future trade relations and that maintaining a close partnership on security was “more important than ever given the geopolitical context”.

EU officials and diplomats have welcomed last week’s proposals as a welcome if overdue starting point for negotiations on an outline of post-Brexit relations that is to accompany a binding treaty on the immediate aspects of withdrawal. But Barnier will also be posing many questions on just how some issues, notably around customs and sharing regulatory standards would work.

Getting an outline on those is vital to solving the biggest obstacle to the urgent withdrawal treaty — how to avoid customs and other friction on the new EU-UK land border in Ireland.

Dublin and London say they are committed to avoiding a “hard border” but the EU is also determined to avoid creating a huge loophole in the external frontier of its single market and customs union.

With time running short and little sign of May quelling the revolts in her party, there has been renewed discussion among Brussels diplomats and officials about whether a deal can be done by October, or at the latest December, to allow parliaments on both sides to ratify a withdrawal treaty before March 29.

“When I see the dynamics in Westminster, I don’t think that there is, at this stage, a majority for whatever type of thing we could ever agree with them,” one senior EU official said.

However, while EU leaders have made no secret of being ready to extend the deadline for a few weeks, there are reservations about any longer delay, short of a U-turn in Britain and a call from London to call Brexit off.

Among problems for delaying Brexit is a European Parliament election in late May 2019 which would create questions over when and how it could ratify a late Brexit deal, assuming Britain does not elect members to the new legislature.