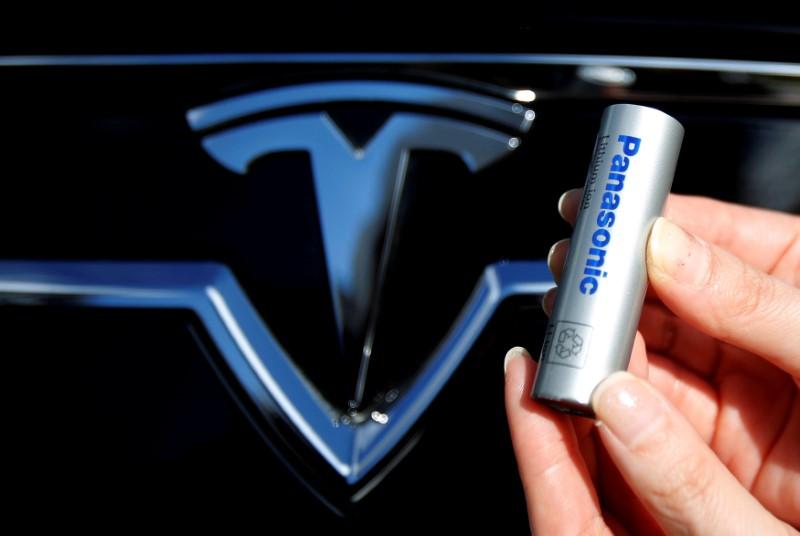 LONDON/TOKYO (Reuters) – Panasonic Corp (6752.T) said it was unable to determine how much of the cobalt used in batteries it makes for Tesla cars comes from Cuba, a country subject to U.S. sanctions, and that it had suspended relations with a Canadian supplier as a result of its concerns.

FILE PHOTO: A Panasonic Corp’s lithium-ion battery, which is part of Tesla Motor Inc’s Model S and Model X battery packs, is pictured with the Tesla Motors logo during a photo opportunity at the Panasonic Center in Tokyo, Japan, November 19, 2013. REUTERS/Yuya Shino/File Photo

The Japanese electronics maker, the exclusive supplier of batteries to Tesla Inc (TSLA.O), made the comments following questions from Reuters about whether the batteries contained Cuban cobalt.

Two sources familiar with the matter told Reuters that some of the cobalt that Panasonic uses to make Tesla’s batteries is mined in Cuba by Canadian supplier Sherritt International Corp (S.TO).

Panasonic said it was unable to tell how much cobalt sourced from Cuba via its Canadian supplier ended up in the batteries it provided to the U.S. market “due to co-mingling of sources by its suppliers in several phases of manufacturing processes”.

“Panasonic has chosen to suspend its relationship with its Canadian supplier,” a spokeswoman said, without naming the supplier. She added that Panasonic had used cobalt from the Canadian supplier for batteries used in the Tesla Model S and Model X, but only after February this year.

“Panasonic has sought guidance from the U.S. Treasury Department’s Office of Foreign Assets Control (OFAC) regarding its interpretation of the scope of the U.S. ban on Cuban-origin imports,” she said.

A U.S. Treasury official, who asked not to be named, said Treasury does not discuss investigations and could not confirm whether one existed.

The United States imposed sanctions on Cuba after Fidel Castro nationalized swathes of American assets more than 50 years ago.

Tesla, when asked for comment by Reuters, did not address questions about whether its batteries contained Cuban cobalt or whether that could potentially put the company in breach of sanctions.

A spokesman said: “Tesla is aiming to achieve close to zero usage of cobalt in the near future.”

The electric vehicle maker, run by billionaire Elon Musk, said in May that it had been working for years to reduce the amount of cobalt it uses in its batteries.

Sherritt declined to comment on questions about whether it sold cobalt to Panasonic.

“We’ve been working in Cuba for 25 years and we sell our Class 1 nickel and cobalt that’s refined from our facility in Fort Saskatchewan, Alberta, to customers in Europe and Asia.”

An anticipated electric vehicle revolution has sent demand and prices for cobalt – a crucial component in car batteries – surging over the past two years.

Companies are under pressure to prove that the minerals they consume are sourced from mines that do not employ children or cause major environmental damage. Global cobalt supply is dominated by the Democratic Republic of Congo, which is riven by conflict and political instability.

Sherritt produces Cobalt at the Moa mine in Cuba, a 50-50 joint venture between the Canadian company and the state-owned General Nickel Company of Cuba.

Panasonic buys cobalt from Sherritt and the metal is then turned into specialized cobalt chemicals by a contractor, according to the sources.

Panasonic is also supplied with cobalt chemicals by Sumitomo Metal Mining Co Ltd (5713.T), which produces most of its material in the Philippines, the sources said.