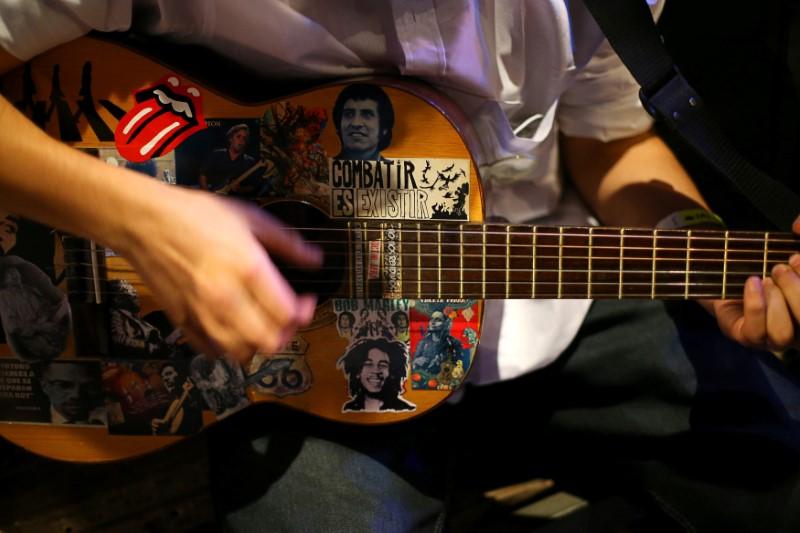 SANTIAGO (Reuters) – The daughter of popular Chilean folk singer Victor Jara has urged the Chilean government to act quicker to push for the extradition from the United States of the man found liable for the 1973 murder of her father.

Amanda Jara was eight years old when her father, Victor Jara, a celebrated singer, theater director and university professor, was detained along with his students and scores of other leftists in a Chilean soccer stadium after the coup that installed late dictator Augusto Pinochet to power. There, witnesses said he was beaten and shot dead.

Victor Jara’s work, and the nature of his death, inspired tributes from artists including Bruce Springsteen, the Clash and U2. His music and memory remain a fixture in modern Chilean society.

A Chilean judge sentenced eight retired military officers to 15 years in prison in July for his murder, after a long-running inquiry.

But another man wanted in connection with the murder remains free and is living in the United States.

Retired army lieutenant Pedro Barrientos was found liable for Victor Jara’s death in 2016 in a federal civil court in Florida, where an ex-conscript described how Barrientos would later brag and show off the pistol he used to shoot and kill the singer.

Barrientos could not immediately be reached for comment. The lawyer who represented him at the trial no longer represents him, the law firm said.

Chile’s demand for his extradition, first made in 2013, hangs in limbo.

In an interview last week near her home in the Chilean fishing village of Quintay, Amanda Jara, now 53, praised July’s ruling as a “blow to impunity” but criticized Chilean officials for not doing enough to pursue Barrientos, now 69.

“It has been hugely frustrating that the Chilean administrations haven’t put either the resources or the political will behind the extradition order,” she said.

Chile’s foreign ministry office said in an email to Reuters that the administration of President Sebastian Pinera, which took power in March, wanted to “act quickly” on the case.

Foreign affairs minister Roberto Ampuero said in July that he had reactivated the extradition request.

Amanda Jara said that “we would very much like to talk to our foreign minister and see what they plan to do.”

“We understand it’s a complicated case. But because of the years that have passed, we feel that the government needs to commit energy, as in lawyers and resources, in order to push this extradition order forward,” she added.

The U.S. Department of Justice and the State Department declined to comment on the status of Chile’s request for Barrientos’ extradition.

Amanda Jara said she and her family felt they had been granted a certain measure of justice by the Chilean people, who have made her father a part of the country’s collective memory.

She said the recent news surrounding her father’s case has led her to think about one of his last and most well-known songs, “Manifiesto,” in which he wrote that “a song takes on a meaning when its own heartbeat is strong, sung by a man who will die singing truthfully singing his song.”

“I think he probably felt something looming, and he wrote that song saying this is who I am, and this is why I sing,” she said.