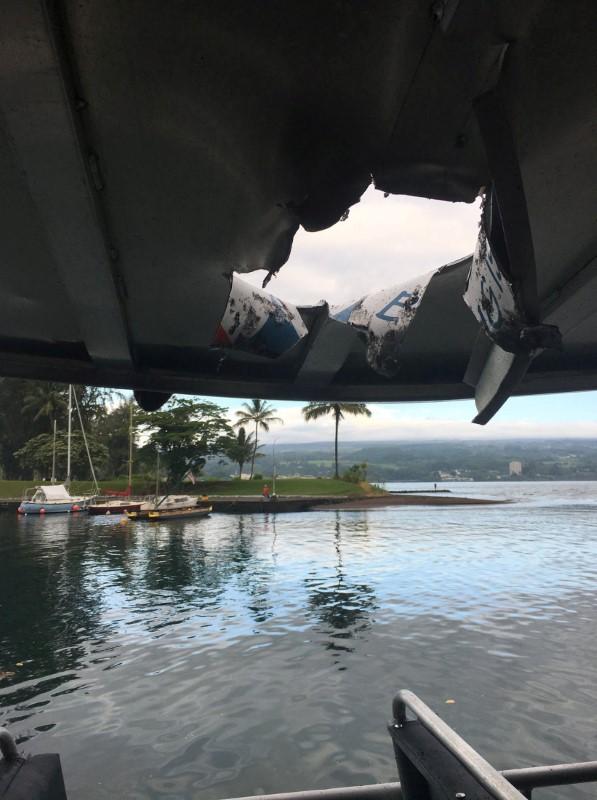 (Reuters) – When “lava bombs” crashed into a tour boat in Hawaii this week, causing third-degree burns and a broken femur in the chaos, passengers used what little they had to help the injured during an agonizing 1-3/4-hour trip back to port, according to a former paramedic on the vessel.

FILE PHOTO: A hole, punched through the roof of a tourist boat, is seen, after lava from the Mount Kilauea volcano exploded in the sea off Kapoho, Hawaii, U.S. July 16, 2018. Hawaii Department of Land and Natural Resources/Handout via REUTERS/File Photo

The boat’s captain sailed back to Hilo gingerly so as not to jolt the broken femur of a 20-year-old woman while passengers used coats to stop bleeding and seat padding to treat wounds, said Will Bryan, 38.

Bryan was among dozens of tourists watching lava pour into the ocean off Hawaii’s Big Island at dawn on Monday when a volcanic explosion hurled molten rock and ash at the “Hot Spot” boat operated by Lava Ocean Tours.

The incident injured 23 people and highlighted the dangers of a booming “lava tourism” business as visitors flock to see Kilauea volcano’s biggest eruption in over a century.

Bleeding profusely from cuts on his legs caused by flying rocks, Bryan said he first checked his girlfriend was OK, then went to the aid of the woman with a broken leg, together with two other medical professionals.

“Everyone just helped out as they could, if we needed padding people were taking it off their seats to give it to her. People were taking their life vests and giving it to her so we could splint her leg,” said Bryan, a respiratory therapist from Portland, Oregon, who posted a video of the explosion.

Passengers and crew helped burn victims cool their wounds with air, but they had to wait for medical treatment in Hilo, about 26 miles (42 km) north of the incident in Kapoho Bay, Bryan said by telephone from his Portland home.

When the woman with the broken femur said she had lost feeling in her leg, Bryan and others asked boat captain Shane Turpin to speed up.

“We had no resources to help them, they just had to kind of grin and bear it for two hours, which is horrible,” said Bryan, adding that he had hoped a medi-vac helicopter might arrive.

Hawaii Fire Department, which took control of the incident, did not send a helicopter due to factors such as the time it would take to get there, the difficulty of hoisting the injured woman from the boat and the fact Turpin told them he would be back in Hilo within 40 minutes, according to a commander.

“Under the circumstances, and based on the information we received, it was the best response plan possible,” said Battalion Chief Matthias Kusch, duty officer at the time of the incident.

Turpin declined to comment but said in a text message he expected to issue a statement on the incident, which remains under investigation.

Bryan said he saw complete strangers on the boat comforting one another with hugs and telling the injured they would be OK.