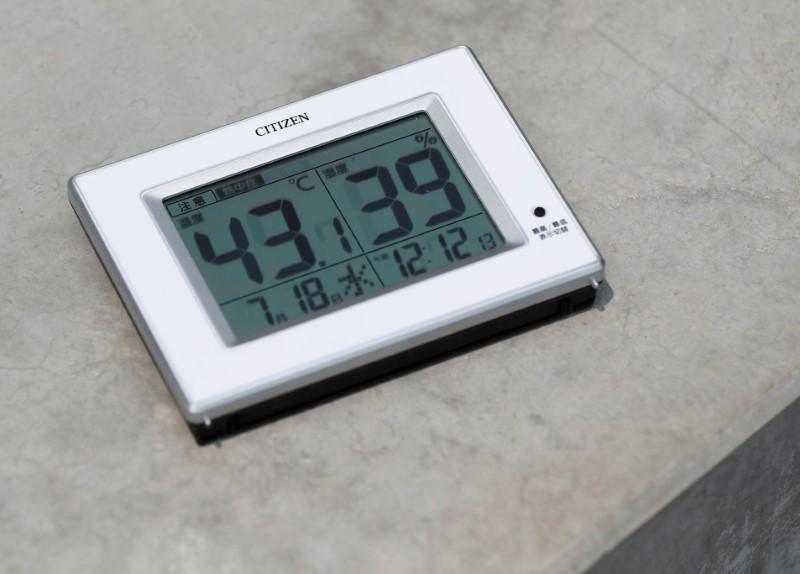 TOKYO (Reuters) – A jacket with built-in fans, a road coating to rein in heat and factory mist sprayers were on offer at a trade fair in the Japanese capital on Thursday as it struggles with record heat two years before it hosts the Summer Olympics.

Summer in Japan has always been hot and humid, but a heat wave this year has brought unprecedented scorching temperatures in some areas, killing at least 14 in Tokyo since the start of July and sending thousands nationwide to hospital.

The high in Tokyo was 34.8 degrees Celsius (95 F), while in the ancient capital of Kyoto it stood around 39.8 Celsius (104 F) on the sixth straight day of temperatures at 38 degrees or more, a level unseen since record-keeping began.

With the heat wave expected to continue for at least one more week and perhaps even until month-end, the products on display at the trade fair held out the prospect of relief.

A jacket that cools the wearer had side panels carrying two built-in battery-operated fans, to draw in air, and help evaporate sweat.

“It’s so cool it feels like you’re wearing an air conditioner on your back,” construction worker Ryunosuke Furusawa, 45, said of the jacket, developed by inventor Masanori Hara at NSP Corp.

“There’s lots of times where we work outside with no shade, so this is the best thing outside of staying hydrated to fight off heat stroke.”

A compound produced by Fujita Road Construction Co Ltd makes pedestrians feel a couple of degrees cooler, by reflecting heat and ultraviolet rays after it is sprayed on asphalt and concrete road surfaces to cut temperatures by 10 to 15 Celsius.

“If possible, we’d like to see this used around the Athlete’s Village or the main stadium (for the Olympics),” said Takeshi Kamaeguchi, technical director of the firm’s construction department.

The heat has stoked concerns about the suitability of Tokyo as a venue for the 2020 Olympics, set to begin on July 24 and finish on August 9, when the men’s marathon will be held, starting from 7:00 a.m.

FILE PHOTO: A temperature indicator measures 43.1 degrees Celsius, placed on the surface of the spectators’ stand at the construction site of the New National Stadium, the main stadium of Tokyo 2020 Olympics and Paralympics, during a media opportunity in Tokyo, Japan July 18, 2018. REUTERS/Issei Kato