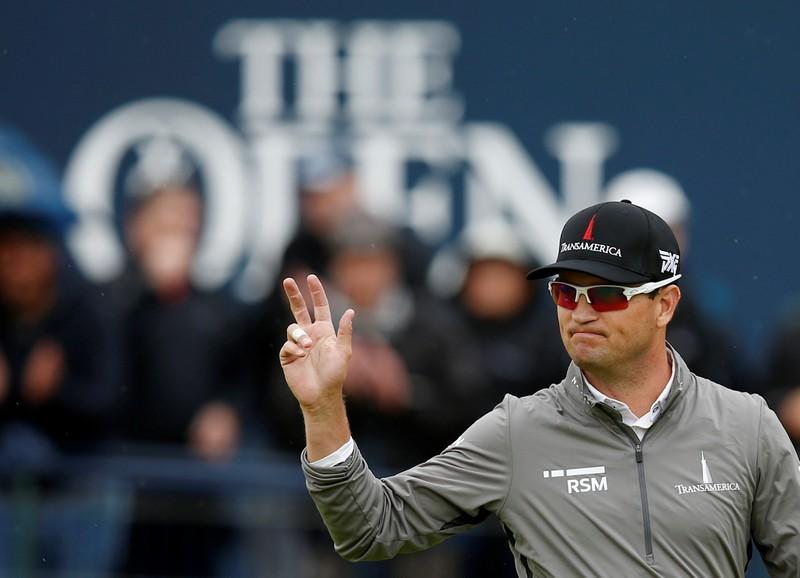 It has been 50 years since an American held the lead at the midway point of an Open played at Carnoustie.

Golf – The 147th Open Championship – Carnoustie, Britain – July 20, 2018 Zach Johnson of the U.S. reacts after making birdie on the 18th during the second round REUTERS/Andrew Yates

This time, two Americans share the lead in the 2018 The Open Championship after two trips around the famous course in Angus, Scotland.

Zach Johnson and Kevin Kisner are the co-leaders at 6-under 136 after Friday’s second round of The Open at Carnoustie Golf Links. One shot behind are two more Americans in Xander Schauffele and Pat Perez. Englishman Tommy Fleetwood is also one shot off the pace.

Billy Casper was the 1968 leader by four strokes at the midway point and carried the lead into the final round. But a 78 derailed his efforts and he finished fourth in a tourney won by Gary Player.

Johnson shot a 4-under 67 on Friday, while Kisner carded a 70. Fleetwood shot a 65 — the lowest score this week — with the only bogey-free round of the tournament, Schauffele fired a 66 and Perez finished with a 68.

Kisner held a two-shot lead when he reached 18 before suffering a double-bogey. He also had five birdies and two bogeys.

“What are you going to do?” Kisner told reporters. “You can’t beat yourself up over hitting a poor shot. I don’t think I mismanaged the way I played. Things happen for a reason, and hopefully I’ll have another chance to prove that I can do it here.”

The world’s top two players both missed the 3-over cut line. World No. 1 Dustin Johnson missed the cut by three strokes after shooting a second-round 72, while Justin Thomas missed by one stroke after a horrific 77.

Northern Ireland’s Rory McIlroy is among five players tied for sixth at 4-under 138 after his second straight 69.

Defending champion Jordan Spieth (67) and Rickie Fowler (69) are among three players who are three shots off the pace.

Tiger Woods and Australia’s Jason Day both shot even-par 71s and are six shots behind the lead. Phil Mickelson is also part of the tie for 29th place at even par for the tournament after posting a 69.ro

Masters champion Patrick Reed shot 70 to narrowly make the cut at 3-over 145. England’s Justin Rose (73) delivered a birdie on 18 to make the cut.

Zach Johnson’s experience on 18 was much better than Kisner’s, as he sank a 30-foot birdie putt to finish a round in which he had five birdies and one bogey, which came on the first hole.

Kisner and Zach Johnson are two of six golfers sharing a house. The others are Spieth, Fowler, Jason Dufner and Jimmy Walker.

“I feel like the house I’m in is a lot cleaner than the other guys are in,” Fowler said. “Jordan can be messy. He’s a little scattered but he knows where everything is.”

Fleetwood’s round was clean for the second straight day. He made six birdies despite insisting he didn’t have his best stuff.

“Normally, when you play great, you know where the ball is going,” Fleetwood said. “A lot of the shots, I was just looking up, and I was really happy that they were going straight. I didn’t feel fully confident and fully comfortable with my swing.”

A win in Scotland for the Englishman would represent the first time the Claret Jug was claimed by a golfer from the homeland since Nick Faldo in 1992.

Woods is still around for the final two days. He missed the cut at St. Andrews in 2015 and did not play The Open in either of the past two years.

“It was a test, but I have to say that the fairways were a lot easier to hit today,” Woods told The Golf Channel. “They weren’t as fiery, the ball wasn’t traveling as far on the ground.”

Meanwhile, Spieth has a simple goal for Saturday.

“The goal tomorrow is just to be closer to the lead when I finish than when I start,” Spieth said.