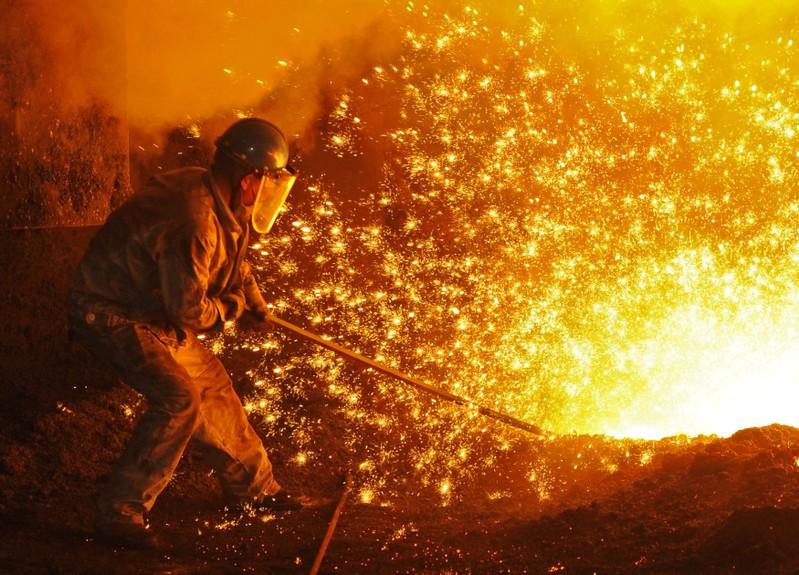 BEIJING (Reuters) – Production cuts in China’s mammoth steel sector will vary from mill to mill next autumn and winter, said an environmental ministry official, as the country shifts away from a ‘one size fits all’ approach to fighting pollution.

An employee works next to molten iron at a steel mill of Dongbei Special Steel in Dalian, Liaoning province, China July 17, 2018. REUTERS/Stringer

That comes after the nation’s state council earlier this month said the 82 cities required to take special anti-smog measures over autumn and winter would be able to draw up their own bespoke plans for those steps.

“This year, production curbs (in the steel industry) will definitely be differentiated based on the emission level at each steel mill,” Liu Bingjiang, director of the air environmental management department at the Ministry of Environment and Ecology (MEE), said at a conference on Saturday.

Industrial plants in the steel, cement and primary aluminum sectors in 28 northern cities were last winter ordered to cut as much as 50 percent of their production capacity as part of the government’s years-long ‘war on pollution’.

But some local officials simply imposed blanket production suspensions on all industrial enterprises regardless of their emission levels, stoking some public discontent.

The MEE said in May that it planned to end the ‘one size fits all’ approach to fighting pollution and promised to give local regulators enough time to make their own plan rather than imposing orders from above.

“Differentiated measures will give companies more incentives to improve their emission levels,” Wu Jianjun, director of the air pollution department at the Tangshan Environmental Bureau, said on the sidelines of the conference.

Tangshan, China’s top steelmaking city, will hire a third-party institute to assess emission levels at mills and will implement curbs based on those results, Wu said.

Detailed production restriction plans for winter have not been issued in Tangshan, in the province of Hebei, but the rates are expected to be higher than last year, according to Wu.

“Environmental measures will be more and more stringent until at least 2020.”