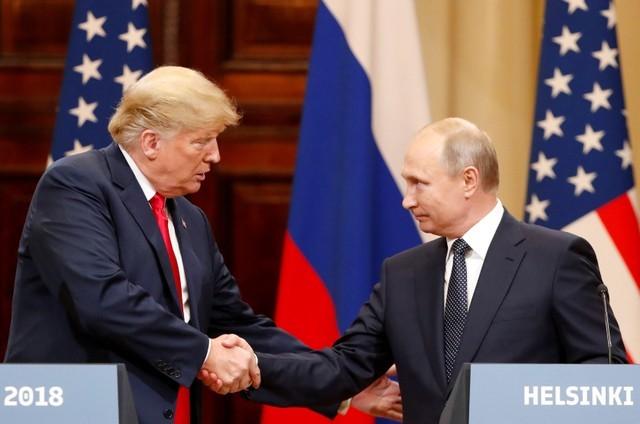 WASHINGTON (Reuters) – Democrat Abigail Spanberger, a former CIA officer running in a competitive congressional race in Virginia, is using the outcry over President Donald Trump’s meeting with Russia’s Vladimir Putin to press what she and other Democrats believe will be a powerful campaign theme.

She declared that her Republican rival is choosing party over country – a message Spanberger and dozens of other Democratic candidates with U.S. military or intelligence agency experience believe will resonate with voters, bolstered by their national security credentials.

By touting their service, the Democratic candidates are trying to upend a long-held political tenet that Republicans are the country’s foreign-policy hawks. This year, some Democrats see an opening, fueled by Trump’s embrace of Putin, to speak to voters worried that American alliances may be shifting.

“Russia was never a daily issue, which is why our candidates were focused on bread-and-butter issues,” said Democratic strategist Maria Cardona with the Dewey Square Group, who was a Democratic National Committee spokeswoman.

“But this has given our candidates an opening to talk about this president from a national security standpoint, which does matter, and they can talk about it in very personal terms.”

In a statement after the Trump-Putin meeting in Helsinki, Spanberger said Trump had “ceded authority to a foreign adversary and tyrant” by failing to confront Putin over Russia’s interference in the 2016 U.S. presidential election.

She said her Republican opponent, U.S. Representative Dave Brat, chose “his party allegiance over our country” in his summit response.

Brat, in Twitter posts after the summit, said the United States should “stand unequivocally opposed to a foreign government meddling in our elections.” He then criticized former Democratic President Barack Obama’s handling of Russia, and did not mention Trump or the summit.

In a statement, Brat called it “a joke” to suggest Democrats “have ever been tough on Russia.” His campaign said he had long believed the United States “should regard Russia as an enemy, not a friend.”

In November, all 435 House seats are up for grabs. Democrats need to flip 23 to gain control of the chamber, which would allow them to derail or stall much of Trump’s policy agenda.

According to a Reuters/Ipsos poll, Russia may increasingly motivate Democratic voters. Some 36 percent of Democrats consider Russia an imminent threat to the United States, up from 27 percent in October 2016, according to the online poll conducted July 16-17, after the summit on Monday. The poll showed 15 percent of Republicans said they consider Russia an imminent threat, down from 24 percent before Trump was elected.

There are 236 military veterans – including 81 Democrats and 131 Republicans – running for House seats, according to With Honor, a group that works to elect veterans from both parties.

VoteVets, which backs veterans with progressive policy platforms, says it has endorsed more candidates this year than in any year since it began doing so in 2006, reflecting the uptick in Democrats with military experience seeking congressional seats.

The Trump-Putin meeting has allowed many of these candidates to highlight their backgrounds and also a message that features prominently in many of their campaigns: country over party.

“​When will ​GOP in Congress put #CountryoverParty and show the courage to flat out condemn these actions?” Democrat Amy McGrath, a former Marine Corps fighter pilot challenging a Republican congressman in Kentucky, wrote on Twitter.

The Democratic veterans have had a decidedly different response to the summit than more liberal candidates in the party. Representative Beto O’Rourke, for instance, has called for Trump’s impeachment as he seeks to oust Texas Republican Ted Cruz from the U.S. Senate.

Navy veteran Elaine Luria, another Democrat running in Virginia, tweeted that she agreed with Republican Senator John McCain of Arizona, a veteran and former prisoner of war, when he said, “President Trump proved not only unable, but unwilling to stand up to Putin.”

Luria’s Republican opponent, Scott Taylor, a first-term House member who is himself a former Navy SEAL, said in an interview it was “disappointing that the president did not seize the opportunity to let Putin and the world know the United States will not tolerate meddling in our elections.”

But Taylor said he could foresee Luria overplaying an issue he did not think would be a factor in their race.

Republican strategist Doug Heye said it was no surprise Democrats reacted quickly to the Trump-Putin summit.

“Being perceived as weak on defense has long been a vulnerability for Democrats,” he said.

Spanberger, who spent eight years in the CIA in counterterrorism and worked on narcotics and money laundering cases for the U.S. Postal Inspection Service, said in an interview that she will continue to focus on healthcare, education and other issues that are important to Virginia voters.

But the Trump-Putin meeting was “an impactful, really tangible event that illustrates this general feeling of ‘who is this administration working for and why is Congress not standing up to the president?’” she said.