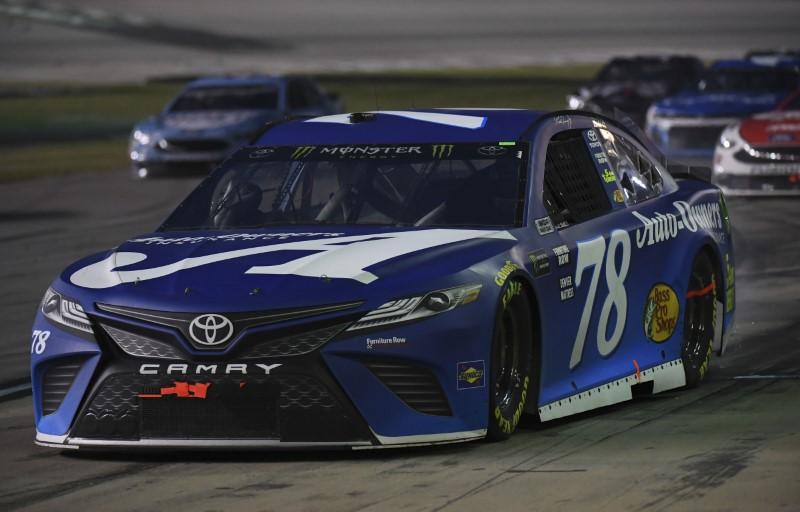 Less than 48 hours after being honored with the ESPY Award for Best Driver, Martin Truex Jr. was still smiling about the national recognition before Friday’s opening practice at New Hampshire Motor Speedway.

It marked the third time in the last four years that a NASCAR champion has won the Best Driver category – also including Kyle Busch in 2016 and Kevin Harvick in 2015. And it speaks volumes about the 2017 title chase and Truex’s own story of perseverance – a theme that has boosted him and the small Denver-based Furniture Row Racing team from underdog to championship caliber.

“It was a big surprise,’’ Truex said of the ESPY. “I didn’t have any expectations. I thought it was cool to be nominated and I really didn’t think about it much more after that. … I was definitely really surprised (to win) and it was pretty cool. Obviously, like I said, a great honor.

“A lot of great drivers on that list, so a lot of people I respect and enjoy watching and pretty cool to be able to win that.’’

Certainly Truex’s amazing 2017 title run made him fully deserving of the ESPN nod. He won a series-best eight races – a single-season record for himself. And he looked absolutely dominant doing so – ultimately winning the Homestead-Miami season finale to earn his shot to hoist NASCAR’s most sought-after hardware.

By all accounts, he’s followed up this year with a similar show of force. His win last weekend at Kentucky Speedway was his fourth of the year – elevating him to championship form again – the third member of a season power trio that also includes five-time winners Harvick and Kyle Busch.

Truex has led 513 laps in the last four Monster Energy NASCAR Cup Series races here only to come up short of victory. He has three top-10 finishes in the last three years. In this race last year, he finished third after earning the pole position and leading a race-best 137 of the 301 laps. He has 10 top-10 finishes in 21 Cup starts and scored two of his five top-five efforts in the last two races. That history at the track and his current string of success gives him and the team great hope for the weekend.

“We’ve been so strong here the past few seasons,’’ Truex said. “It’s always been a really good track for me over the years and, you know, winning K&N races here, winning Xfinity in ‘05 and I really want to get that Cup win because this is a special place for me.

“I’ve been coming here a long time since I was a teenager and this place was really a big springboard for my career, you know? Winning here in front of the Cup and Xfinity guys really was a big part of the reason I got an opportunity to drive cars for a living, so it’s a special place for me. I really love coming up here and really just trying to figure out how to get that Cup win.

“Led the most laps a few times in this race the last few seasons and it seems like the last 75 or so we’ve not been able to somehow be in the front, so try to figure that out this weekend hopefully. It’s time.”

A win on the challenging one-mile New Hampshire Motor Speedway would only add to his diverse resume, putting him on equal standing with five-time winners Harvick and Busch. And it would be a big personal boost to score a trophy at a track especially dear to his heart.

“I don’t know that it’s crucial for our team or our season, but I think for me it’s such a big one,’’ Truex acknowledged. “It’s one I want so bad. Winning here would be for me like winning at Daytona. I mean, it truly is, so just see if we can get it done.

“I know the team’s fired up and ready to go and worked hard to be prepared to come here like they always do and they’re excited and optimistic, so that always makes me feel good and feel like we’ll have a shot at it and certainly we have a lot of momentum right now so hopefully we can take advantage of it.”

Truex smiled, acknowledging the frustration at New Hampshire, but insisting that would only make a win this weekend all the sweeter.

“Sometimes the biggest ones are the hardest ones and I guess for me this is a big one, so it’s been difficult, but look forward to the challenge this weekend of trying to finish the deal,” he said.