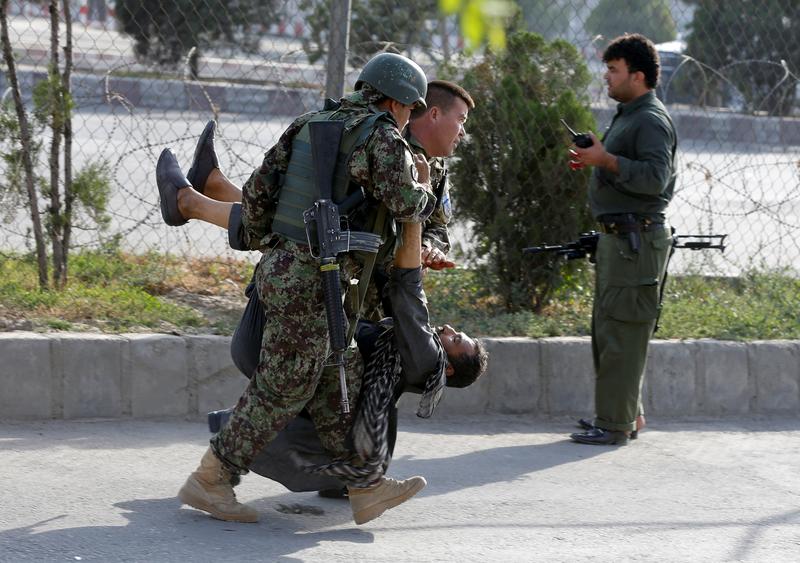 KABUL (Reuters) – Afghan Vice President Abdul Rashid Dostum narrowly escaped a suspected suicide bomb attack at Kabul airport as he returned home on Sunday from more than a year in exile in Turkey over allegations of torturing and abusing a political rival.

Dostum, who left Afghanistan last year amid allegations of torture and abuse, had left the airport in a motorcade only minutes before the explosion, which officials said appeared to have been caused by a suicide bomber.

As many as 10 people were killed and wounded in the blast, said Interior Ministry spokesman Najib Danish.

Kabul police spokesman Hashmat Stanekzai said the blast went off near the main airport entrance, where supporters had been waiting to greet Dostum as his motorcade passed on its way to the city centre.

Victims lie on the ground at the site of a blast in Kabul, Afghanistan July 22, 2018. REUTERS/Omar Sobhani TEMPLATE OUT

“The number of casualties may rise. The blast happened right after Dostum’s convoy left the airport,” he said.

Dostum, an ethnic Uzbek veteran of decades of Afghanistan’s sometimes bloody politics, was unharmed and greeted cheering supporters at a rally in his office compound.

Much of the area around the presidential palace was shut down for the arrival and there was a heavy security presence on the streets, emphasising the increasingly volatile political climate in Kabul.

Dostum faced outrage from Western donor countries including the United States, after reports in 2016 that his guards had seized political rival Ahmad Eshchi and subjected him to beatings, torture and violent sexual abuse.

He denied Eshchi’s accusations but, amid international demands that he be held accountable, he left the country in May last year, ostensibly to seek medical treatment in Turkey.