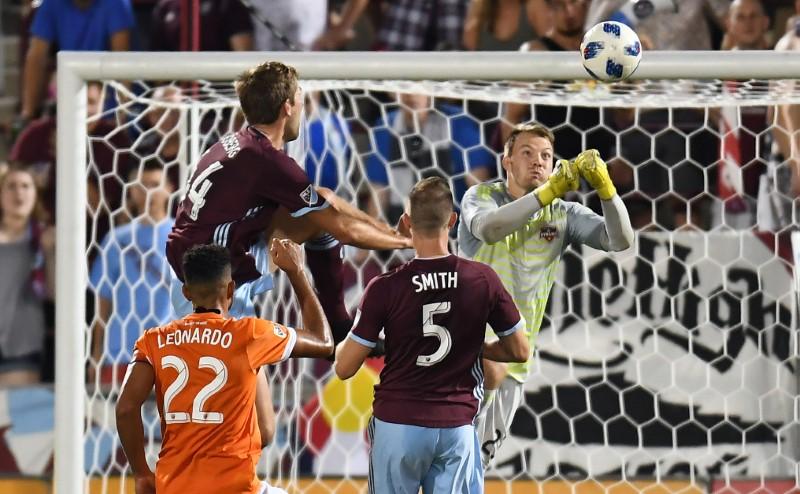 Houston goalkeeper Joe Willis made a huge save on a second-half penalty kick to help the Dynamo earn a 1-1 tie with first-place FC Dallas on Saturday night in the Texas Derby at BBVA Compass Stadium.

Willis stymied FC Dallas forward Roland Lamah in the 62nd minute to keep the game tied. He also covered up the ensuing rebound.

Defender Matt Hedges scored the lone goal for FC Dallas, (11-3-6, 39 points), which is four points ahead of second-place Los Angeles FC in the Western Conference.

The tie was the fifth in the past six meetings between the two teams.

FC Dallas was in position to take the lead in the 62th minute when Lamah lined up for the penalty kick. Willis made the save and the rebound sharply headed back toward Lamah, who saw the ball carom off his shin and back toward the net before Willis dove on the ball.

The Dynamo immediately responded and appeared to have taken the lead when Manotas slid to receive a cross from defender DaMarcus Beasley and knocked the ball in with his right foot. But during a video review, Manotas was ruled to have been offside, and the game remained tied at 1.

Lamah received another opportunity to give Dallas the lead in the 72nd minute when the ball bounced his way and he faced a wide-open net. But his left-footed blast caromed off the top of the crossbar and out of play.

FC Dallas aggressively started the game and it paid off when Hedges easily knocked a point-blank header past Willis in the opening minute.

The goal was set up by midfielder Santiago Mosquera’s superb cross in the direction of Hedges, who tallied his first goal of the season and 14th in his seven MLS seasons.

The Dynamo tied the contest seven minutes later when midfielder Romell Quioto sent a pass toward Manotas, who headed the ball from close range past FC Dallas goalkeeper Jesse Gonzalez.

The goal was Manotas’ 10th of the season, and his fifth in the past six matches.

Mosquera departed in the 25th minute with a leg injury.