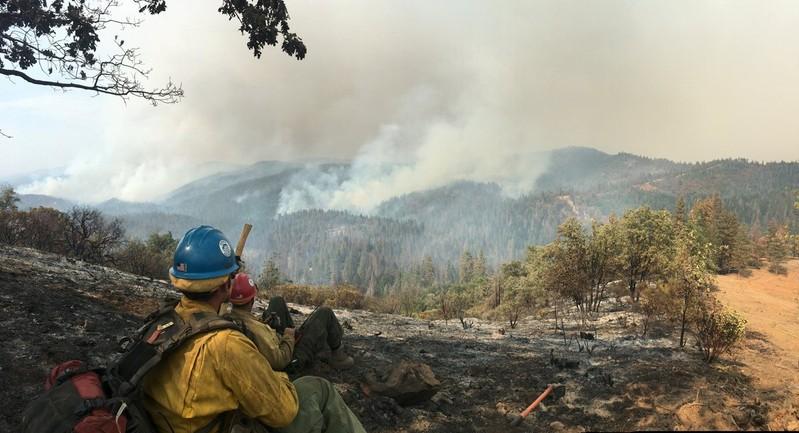 (Reuters) – A raging California mountain blaze that has already killed one firefighter grew over the weekend and bore down on Yosemite National Park, prompting the closure of some smoke-choked campgrounds and roads at the popular tourist destination.

The Sierra Hotshots, from the Sierra National Forest, are responding on the front lines of the Ferguson Fire in Yosemite in this US Forest Service photo from California, U.S. released on social media on July 22, 2018. Courtesy USDA/US Forest Service, Sierrra Hotshots/Handout via REUTERS

The so-called Ferguson Fire, which started on July 13 in the Sierra National Forest, grew by more than 10 percent in size over the weekend, sending smoke billowing for miles (km) and causing air quality alerts for parts of the San Joaquin Valley, officials said on Sunday.

“Air quality and visibility have been severely affected by smoke. Visitors should expect limited visibility and should be prepared to limit outdoor activities during periods of high concentration,” Yosemite National Park said on its Twitter feed over the weekend.

The Sierra Hotshots, from the Sierra National Forest, are responding on the front lines of the Ferguson Fire in Yosemite in this US Forest Service photo from California, U.S. released on social media on July 22, 2018. Courtesy USDA/US Forest Service, Sierrra Hotshots/Handout via REUTERS

Parts of the Ferguson Fire were about 20 miles to 30 miles (30-50 km) south and southwest of the park as of Sunday. Nearly 3,000 firefighters were battling the blaze that has burned through nearly 30,500 acres (12,340 hectares) of bone-dry terrain and was 6 percent contained as of Sunday, according to the California Department of Forestry and Fire Protection.

Crews have been struggling to build fire lines around the blaze because flames are burning in steep canyons that are difficult to access with heavy equipment.

Firefighter Braden Varney was killed shortly after the fire broke out when a bulldozer he was using to cut a fire break overturned. Varney was the 10th U.S. wildland firefighter to die in the line of duty this year, according to National Interagency Fire Center data.

The fire is one of about 50 major wildfires burning in the United States over the weekend that have so far scorched an area of about 1.2 million acres (485,620 hectares). Most are in western states with blazes also in Central Texas and Wisconsin, according to the InciWeb tracking service.