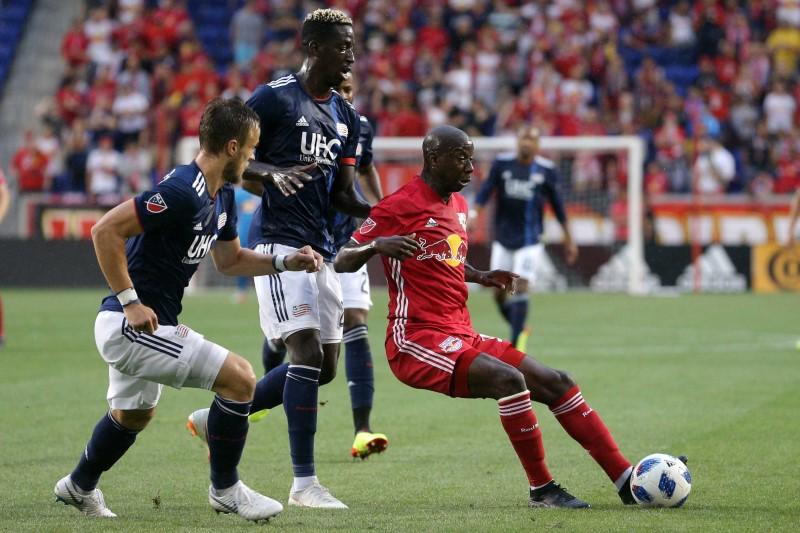 Bradley Wright-Phillips and Daniel Royer each scored goals and Luis Robles picked up his sixth shutout of the season as the New York Red Bulls blanked the New England Revolution 2-0 on Saturday night at Red Bull Arena in Harrison, N.J.

It was the 13th goal of the season and 99th of his career for Wright-Phillips, who ranks second in the MLS in goals this season behind Atlanta United’s Josef Martinez, who has 22.

Robles had a highlight-reel, point-blank save on Teal Bunbury in the 36th minute en route to picking up his 55th career shutout.

It was the fifth win in six league matches for New York (12-5-2, 38 points), which improved to 8-1-1 in home games this season. The Red Bulls, who also improved to 9-0-4 in their last 13 home matches against New England, moved within two points of second place New York City FC in the Eastern Conference standings.

It was the third straight loss for the Revolution (7-7-7, 28 points), who remain one point ahead of sixth-place Montreal in playoff standings in the Eastern Conference. Matt Turner had one save for the Revs.

New York just missed taking a 1-0 lead in the second minute of the game when defender Aaron Long broke free in front of the six-yard box and headed Sean Davis’ corner shot into the middle of the crossbar where it popped up and went out of bounds.

New England’s best scoring chance in the first half came in the 36th minute when midfielder Diego Fagundez curled a crossing pass from outside the right side of the penalty box to the edge of the six-yard box where Robles stopped a charging Bunbury’s close attempt with his chest.

Royer broke the scoreless tie in the 69th minute with his fifth goal of the season off an assist by midfielder Marc Rzatkowski. Rzatkowski curled a left-footed free kick from near the right corner which sailed over several defenders and to the charging Royer, who redirected it into the net with his left foot.

Eleven minutes later, Wright-Phillips made it 2-0 when he broke free in the middle of the penalty box and headed a crossing pass by Alejandro Romero Gamarra past a diving Turner and inside the left post for the game-clinching goal.