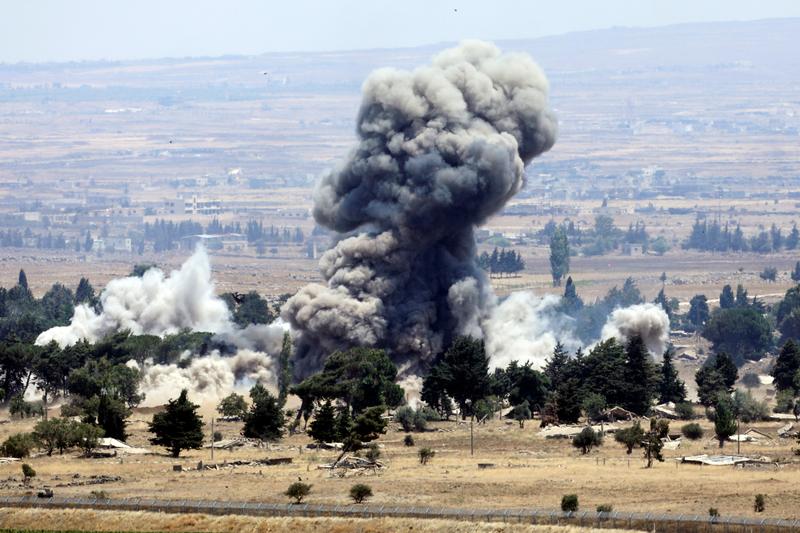 AMMAN (Reuters) – Russian and Syrian jets stepped up their bombing of an Islamic State bastion along the Jordan-Israel border in southwestern Syria, as the militants pushed into areas abandoned by other rebel groups, diplomatic and opposition sources said.

An explosion is pictured at Quneitra at the Syrian side of the Israeli Syrian border, as seen from the Israeli-occupied Golan Heights, Israel July 22, 2018. REUTERS/Ronen Zvulun

Islamic State-affiliated forces entrenched in the Yarmouk Basin, which borders the Israeli-occupied Golan Heights and Jordan, also repelled a ground attack by the Syrian army and its allies, the sources added.

The rural area has become the main battleground in the sensitive border region after a major Syrian army offensive backed by its Russian allies routed other rebel groups who were once supported by Washington, Jordan and Gulf states.

The Syrian army said its aerial strikes and shelling of militants in the Yarmouk Basin had killed “tens of terrorists” in a campaign whose goal it said was to crush militants.

An intelligence source told Reuters 1,000-1,500 Islamic State fighters had been holding their ground despite the 10-day-old bombing campaign that he said had hit villages and caused an “untold number” of civilian casualties.

A former resident in touch with relatives said thousands of civilians had fled bombed villages to areas held by the army or the rebels.

Another source familiar with the situation said Islamic State had actually been able to expand its territory over the last 20 hours by seizing at least 18 villages abandoned by other rebels under the banner of the Free Syrian Army (FSA).

An explosion is seen at Quneitra at the Syrian side of the Israeli Syrian border as it is seen from the Israeli-occupied Golan Heights, Israel July 22, 2018. REUTERS/Ronen Zvulun

Syria’s army and its allies have been pushing to expand their foothold near the Golan frontier by negotiating surrender deals with rebel groups and allowing them to move to opposition-held areas in northern Syria.

On Sunday, the evacuation of hundreds of rebels and their families resumed for the third day from villages along the Golan frontier as part of a Russian-brokered surrender deal, sources said.

The deal brings the area back under government control and lets Syrian army brigades return to where they were stationed before Syria’s seven-year-old conflict – posts near a 1974 demilitarized zone with Israel on the Golan frontier.

The opposition said the Syrian army were expected to be deployed in areas abandoned by rebels once the evacuations are completed and heavy weapons given up by rebels.

Russian military police have also entered rebel-held towns as part of guarantees given by the Russians that the army and its allied militias do not take revenge against civilians and former fighters, rebel officials said.

Separately, a source told Reuters on Sunday the unrest in the border area had disrupted efforts to evacuate hundreds of members of Syria’s “White Helmet” civil defence group over the Golan frontier into Jordan.

The plan, backed by Israel and Western powers, had meant to evacuate 800 people overnight, but only 422 made it because of the increased presence of Islamic State and government roadblocks, the source said.

Russia’s military said it had also shot down two unidentified drones that attacked its air base at Hmeimim in northern Syria on Saturday and Sunday, Russian agencies reported.