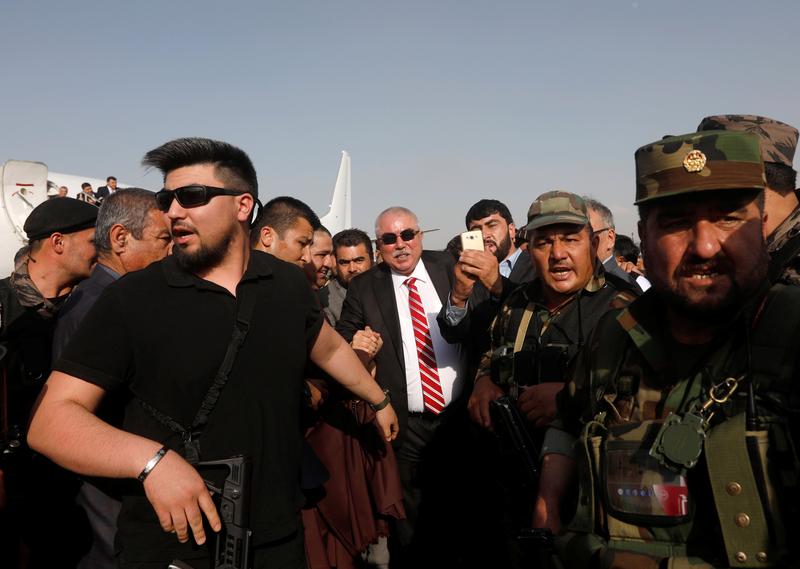 KABUL (Reuters) – Afghan Vice President Abdul Rashid Dostum narrowly escaped a suicide bomb attack at Kabul airport as he returned home on Sunday from more than a year in exile in Turkey over allegations of torturing and abusing a political rival.

Dostum, who left Afghanistan last year after heavy pressure from Western donors including the United States, drove away from the airport in a motorcade only minutes before the explosion, which police said killed at least 14 people and wounded more than 50.

He was unharmed in the blast, which was claimed by Islamic State, and made only brief mention of it when he met cheering supporters who had been waiting for hours to give him a red carpet reception at a rally at his office compound.

However, the incident underlined the increasingly volatile and unstable political climate in Kabul ahead of parliamentary elections in October that are seen as a dry run for more important presidential elections early next year.

Dostum backed calls for peace talks with the Taliban and thanked Afghanistan’s international partners for their help while calling on Afghans to register for the elections.

“Any fraud in this election will lead the country to a serious and dangerous crisis,” he said.

Dostum’s triumphant return was in stark contrast to the outrage he faced after reports in 2016 that his guards had seized political rival Ahmad Eshchi and subjected him to beatings, torture and violent sexual abuse.

He denied Eshchi’s accusations but, amid international demands that he face justice to show that powerful political leaders were not above the law, he left the country in May last year, saying he needed to seek medical treatment in Turkey.

Even in exile, he remained a powerful figure with wide support among his fellow ethnic Uzbeks in northern Afghanistan. While in Turkey, he also formed an alliance with two other powerful leaders, Atta Mohammad Noor, a major force among ethnic Tajiks and Mohammad Mohaqiq, a leader of the Hazara minority, both of whom joined him in Kabul on Sunday.

“Of course, the aim of this coalition was never an anti-government move or against the system. On the contrary, it was aimed at building common support for the system,” he said.

President Ashraf Ghani now faces the challenge of reintegrating Dostum, an ally in the disputed 2014 election who helped deliver the ethnic Uzbek vote but a volatile and unpredictable partner ever since.

On Saturday, Ghani’s spokesman said accusations against Dostum would be dealt with by independent legal authorities.

Dostum’s return followed more than two weeks of sometimes violent demonstrations by supporters demanding the release of one of his militia commanders who was arrested following a dispute with officers in the regular security forces.

In remarks to his supporters, he made a brief reference to the commander, Nizamuddin Qaisari, who remains in custody pending an investigation. But Dostum also called on protesters who had blocked roads and government offices in northern Afghanistan to end their demonstrations.

Once referred to as a “quintessential warlord” by the U.S. State Department, Dostum has long been accused of serious human rights abuses. Shortly after the U.S.-led campaign in 2001, he was accused of killing Taliban prisoners by leaving them locked in airless cargo containers. He has denied the accusations.