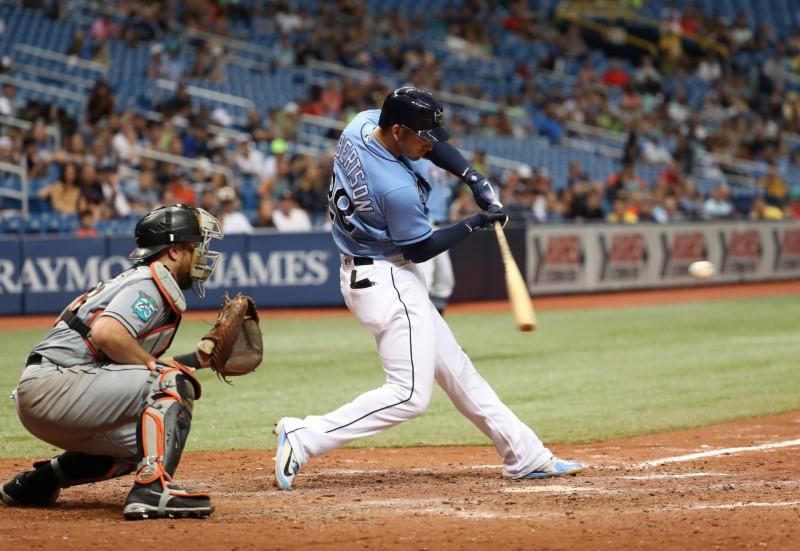 Daniel Robertson lined a pinch-hit, walk-off grand slam to left field, leading the host Tampa Bay Rays to a 6-4 win over the Miami Marlins on Sunday.

The Rays trailed 4-1 entering the ninth when Jake Bauers led off with a double to right, advanced to third on a single by C.J. Cron and scored on Ji-Man Choi’s RBI single.

Miami closer Kyle Barraclough (0-4) struck out Carlos Gomez and got Mallex Smith to ground into a fielder’s choice. However, after walking Willy Adames, Barraclough allowed the homer on a 1-0 fastball to Robertson. According to the Marlins, Robertson’s blast was also the first walk-off grand slam in the history of the franchise, which began play in 1998.

Brad Keller (3-4) allowed three runs on three hits and two walks over seven innings while tying his career high with eight strikeouts. Wily Peralta earned his fourth save in four tries this season by retiring the Twins in the ninth.

Max Kepler homered and Brian Dozier had an RBI double for Minnesota, which lost its third in a row and extended its road losing streak to nine.

The historic home run streak for St. Louis’ Matt Carpenter ended, and Kyle Schwarber’s sixth-inning solo shot snapped a tie and spurred host Chicago to a victory. The Cubs won three out of five games in the series.

Carpenter, who set a single-season Cardinals record by homering in his previous six games, went 1-for-4.

Jose Quintana (9-6) earned the win after allowing two runs on six hits and four walks while striking out six over seven innings.

Khris Davis and Matt Olson each hit two home runs for Oakland. Jeurys Familia (1-0), making his A’s debut after having been acquired in a trade Saturday, earned the win with two innings of shutout relief.

Austin Slater had three hits, including an RBI double, for the Giants, and Andrew McCutchen homered.

Zack Greinke gave up one run and two hits in eight dominant innings while striking out a season-high 13, and Arizona broke a two-game losing streak with a victory over Colorado in Phoenix.

Greinke (11-5) threw first-pitch strikes to 22 of the 27 batters he faced while extending a run in which he has given up five runs in his past 39 1/3 innings.

Healy capped a five-run first inning with his first homer and went deep again in the eighth for his 20th of the season to close the scoring. The Mariners took two of three games in the series.

Ian Kinsler collected three hits for the Angels, including a homer, and Kole Calhoun and Mike Trout also went deep. Heaney (6-6) surrendered one run on four hits and two walks over six innings.

Randal Grichuk and Yangervis Solarte each hit two-run home runs in a four-run eighth inning as Toronto came back to defeat visiting Baltimore.

The Blue Jays completed a sweep of the three-game series after falling behind 4-1 when Baltimore scored two runs in the top of the eighth against John Axford (4-1). Tyler Clippard pitched around a hit batter in the ninth to earn his seventh save of the season.

Anthony Rendon drove in two runs with a first-inning triple, and Bryce Harper homered and had two RBIs as host Washington defeated Atlanta.

The teams battled through two long rain delays, and the game didn’t end until 8:34 p.m. ET — after it was scheduled for a 1:35 start — thanks to stoppages totaling 3:33 along with a game that lasted 3:26.

San Diego scored four runs in the first three innings on two-out hits, and Tyson Ross allowed two runs in five innings during a rout of host Philadelphia in the first game of a split doubleheader.

Carlos Asuaje had two doubles and scored two runs, and Freddy Galvis, Wil Myers and Travis Jankowski each drove in two runs for the Padres, who snapped a six-game losing streak.

Vince Velasquez took a no-hitter into the sixth inning for the third time this season, and Odubel Herrera and Rhys Hoskins homered to help Philadelphia earn a split of the doubleheader with San Diego.

The Padres got only two hits in the second game against Velasquez and three relievers.

Velasquez gave up two hits, a walk and a hit batter with seven strikeouts in seven innings. In two career starts against the Padres, Velasquez has pitched 16 shutout innings, giving up five hits and a walk with 20 strikeouts.

Corey Dickerson bombed his fourth home run of the series among four hits, helping the Pirates complete a sweep during which they collected 43 hits, including 18 for extra bases.

Sale (11-4) gave up just two hits, walked none and struck out nine. He has won his last five starts and has notched at least nine strikeouts in eight consecutive outings.

Steve Pearce and Xander Bogaerts each had two hits and scored two runs, while Andrew Benintendi contributed a two-run triple. Jeimer Candelario homered for the Tigers.

Gallardo (4-1) helped the Rangers avoid a three-game sweep after they allowed 25 runs in the first two games of the series. He allowed three hits and worked around four walks.

Odor went 8-for-13 in the series and drove in three runs in a game for the second time this season. He hit an RBI single in the third off Mike Clevinger (7-6), lifted a sacrifice fly in the fifth and homered in the eighth off Oliver Perez.

Matt Kemp hit two home runs, and Alex Wood worked his way out of trouble to pitch six strong innings as Los Angeles rolled to a win at Milwaukee.

Kemp hit solo home runs in the second and third innings. Manny Machado had two hits, including an RBI double in the second inning, and went 5-for-13 in his first three-game series with the Dodgers since being acquired from the Orioles.

The Brewers loaded the bases in the first two innings against Wood (6-5), but the left-hander limited the damage. He gave up two runs on five hits over six innings with four strikeouts and three walks. Milwaukee lost for the eighth time in nine games.

The series finale between the New York Yankees and New York Mets was postponed because of inclement weather.

The game will be made up on Aug. 13, which previously had been scheduled as an off day for both clubs. The Mets will make a detour to the Bronx between series in Miami and Baltimore, while the Yankees will be in the middle of what now will be an 11-game homestand.