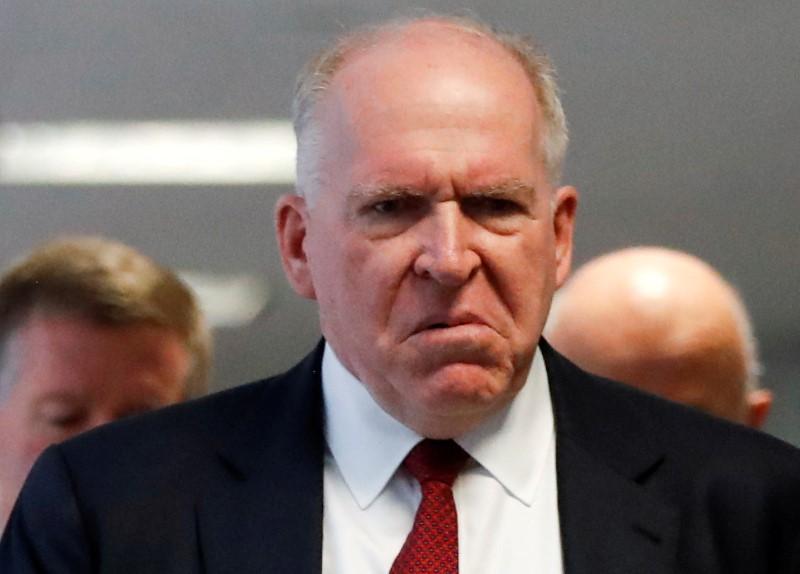 After Trump gave credence following his summit in Helsinki to Putin’s denials about Russian meddling in the 2016 U.S. election despite findings by the American intelligence community, Brennan called Trump’s remarks “nothing short of treasonous.” In his July 16 Twitter post, Brennan added, “Not only were Trump’s comments imbecilic, he is wholly in the pocket of Putin.”

“Accusing the president of the United States of treasonous activity when you have the highest level of security clearance, when you’re the person that holds the nation’s deepest, most sacred secrets at your hands and you go out and you make false accusations against the president of the United States, he (the president) thinks that is something to be very concerned with. And we’re exploring what those options are and what that looks like,” Sanders said.

Asked if Trump was punishing the former officials because of their criticism, Sanders said, “No, I think you are creating your own story there.”

Clapper called the possibility of stripping the security clearances “just a very, very petty thing to do.”

“There is a formal process for doing this, but you know I guess legally the president has that prerogative,” Clapper said on CNN. “He can suspend or revoke clearances as he sees fit, and if he chooses to do it for political reasons, well I think that’s a terrible precedent. And it’s a very sad commentary. And it’s an abuse of the system.”

Many former U.S. officials retain their security clearances after they leave government service because they continue to advise their former agencies or because it is a condition of employment as government contractors or consultants.

The CIA did not immediately comment on the White House threat.

Sanders said Trump is “exploring the mechanisms” to remove the security clearances because she said those officials have “politicized and in some cases monetized their public service and security clearances, making baseless accusations of improper contact with Russia or being influenced by Russia.”