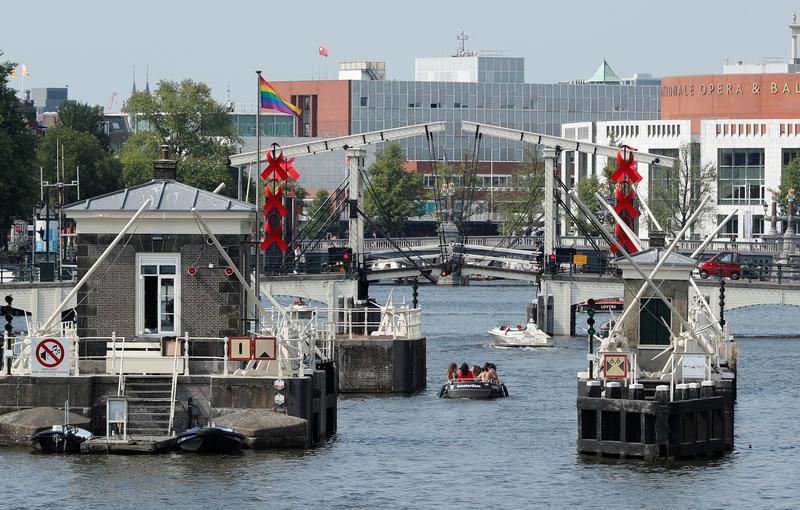 AMSTERDAM (Reuters) – The longest drought in decades is drying out rivers in the usually wet Netherlands, hitting cargo traffic and threatening a shortage of bulk supplies ranging from hops for beer brewers to cement for the construction sector.

A boat cruises past a bridge on a canal in Amsterdam, Netherlands, July 24, 2018. REUTERS/Yves Herman

The summer of 2018 looks set to overtake 1976 as the driest one on record in the Netherlands, with almost no rain for two months and currently not expected until well into August.

An enduring heat wave is expected to take temperatures to above 35 degrees Celsius later this week, and the Dutch national weather institute issued a warning for “extreme weather” on Tuesday, urging people to take precautions.

Water in important rivers such as the Rhine and Ijssel, which depend on rain and snow, has fallen below critical levels, severely limiting cargo traffic, as ships can only be used for a fraction of their normal capacity to keep them afloat.

Cargo ships are seen in the port of Rotterdam, Netherlands, July 24, 2018. REUTERS/Yves Herman

“Many large ships can now only take half to a third of their normal loads,” Joost Sitskoorn of Evofenedex, the Dutch association for logistical companies, told Reuters.

“A lot more ships are needed to meet demand. Overcapacity helped counter this problem for a while, but the supply is starting to dry up.”

This could lead to shortages in a range of goods, with building materials, cattle feed and barley and hop for beer brewers first in line, Sitskoorn said.

Roughly a third of all goods transported in the Netherlands move over water, with the sector carrying a total load of 365.7 billion kg last year, mostly to and from elsewhere in Europe.

Over half of the freight is in the form of bulk goods, such as iron ore, sand, gravel and cement, which are impossible to shift to the road for transport, as it takes some 30 trucks to replace only one small cargo ship.

“I really fear for a situation in which the current low water levels persist,” said Pim van Baaren, director of the Van Nieuwpoort Group, a large supplier of building materials in the Netherlands. “We can manage for now, but mainly because many builders are away for the holidays.”

Transport costs have already risen by 30 percent, Van Baaren said, while the demand for the limited amount of ships available is rapidly driving up prices.

The long, hot summer caused new obstacles on Tuesday when Amsterdam closed two important shipping routes through its canals, as it could not sufficiently cool its iron bridges to open them for ships.

This caught several shippers off guard, as they were suddenly cut off from their customers.

“We had to reroute a ship filled with cement for an important customer from the south of Amsterdam to the north, and they had to shut their factory in the south as we couldn’t reach them,” Van Baaren said.