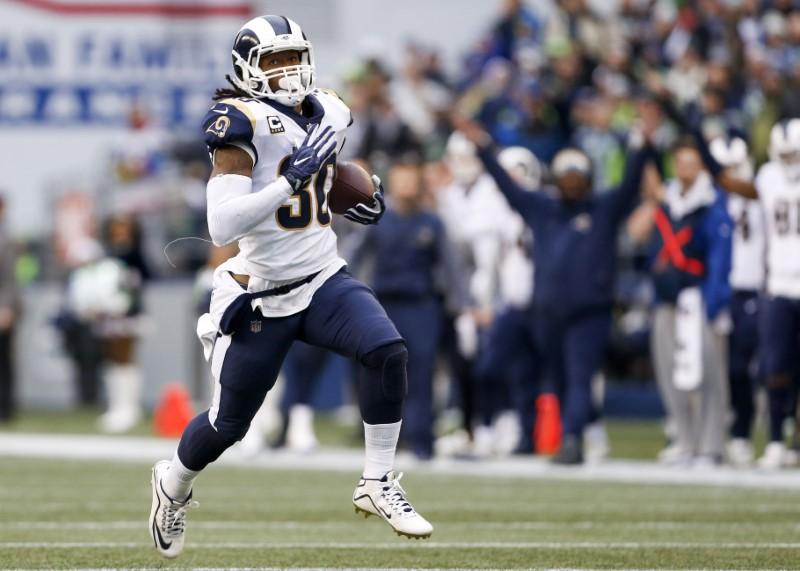 Per multiple reports, the extension is worth $60 million over four years and includes $45 million in guaranteed money.

The guaranteed figure easily eclipses New York Giants rookie Saquon Barkley ($31.2 million) for the most of any NFL running back. The annual average of $15 million is more than Le’Veon Bell will receive in 2018 on his franchise tender ($14.5 million) and approaches double the pay of the next-highest running back (Devonta Freeman, $8.25 million) in the league.

Gurley still had two years remaining on his rookie contract, with $2.3 million due in 2018 and $9.6 million in 2019 after the team picked up his fifth-year option. He is now due just under $72 million over the next six seasons.

Arizona Cardinals back David Johnson — who is expected to receive his own lucrative extension before long as he enters the final year of his rookie deal — tweeted at Gurley, “Congrats my dude @TG3II …..RBs makin moves.” Bell, who will again be headed for free agency next spring, had a similar response to the news, tweeting “yeah todd,” before adding “lol and ppl thought I was trippin?…”

Gurley, who turns 24 on Aug. 3, was named Offensive Player of the Year in 2017 after leading the NFL with 2,093 scrimmage yards and 19 touchdowns. Those totals included 788 receiving yards and six scores on 64 catches. Through three seasons, he has 4,599 total yards and 35 touchdowns in 44 games (43 starts), and has earned two Pro Bowl nods.

“What a special player he is,” head coach Sean McVay told reporters of Gurley in a press conference shortly after the news broke. “I think last year’s production isn’t really a reflection of the value that he provides because he did such a great job, but he’s so much more than that to our team — the way that he competes in protection, the way that he works and the way that rubs off on his teammates.”

Los Angeles also has been making an effort to re-sign reigning Defensive Player of the Year Aaron Donald, who is entering the fifth-year option of his rookie contract and held out of training camp last year in search of a new deal. He is not expected to report to camp this year until he has a new contract, but McVay said Gurley’s deal “doesn’t have any effect” on Donald’s contract situation.

“We’re simultaneously working to make Aaron a Ram a long time,” Snead added, saying the sides still have time to get a deal done before camp. “That’s the goal. I know we’ll get questions about him, but Aaron’s a big part of who we are and where we want to go. … We’re going to continue working to get something done with Aaron.”

A CBS Sports report last week said Donald has been telling people he expects to have a deal done before the start of training camp. Veterans officially report to camp Wednesday, after rookies and quarterbacks reported Monday.

Donald is expected to become the highest-paid defender in football whenever a deal gets done.

Los Angeles also has defensive tackle Ndamukong Suh, franchise-tagged safety Lamarcus Joyner and starting offensive linemen Rodger Saffold, Rob Havenstein and Jamon Brown entering the final year of their contracts. Joyner will play out the 2018 season on his $11.3 million franchise tender after the sides failed to reach a long-term agreement before the July 16 deadline.

“It’s not only Todd but a lot of other guys that we want to, you know, make Rams a long time and be a part of the core that we’re building here,” Snead said.