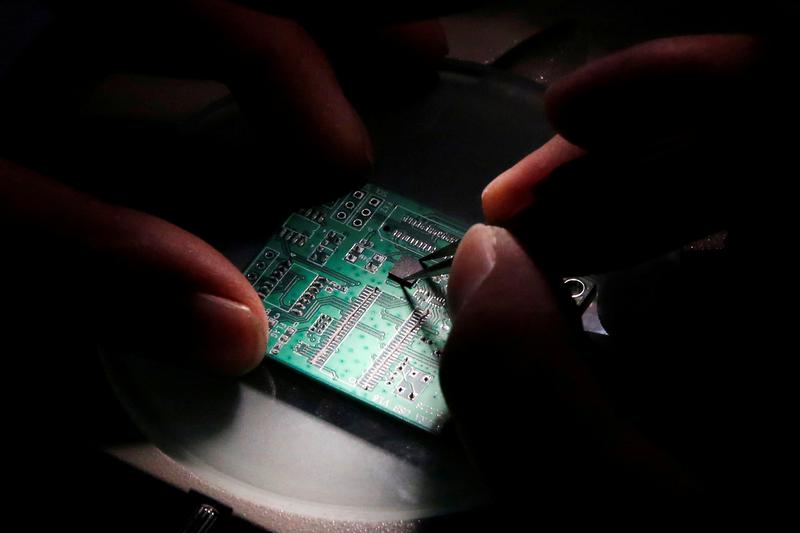 FILE PHOTO: A researcher plants a semiconductor on an interface board which is placed under a microscope during a research work to design and develop a semiconductor product at Tsinghua Unigroup research centre in Beijing, China, February 29, 2016. REUTERS/Kim Kyung-Hoon/File Photo

The deal, which the sources said was signed over a month ago but has not yet been announced publicly, will be a key test of European regulators’ stance on Chinese investment in the region that has been on the rise amid the country’s worsening trade relations with the United States.

Tsinghua’s acquisition of Linxens from private-equity group CVC is still pending regulatory clearance, three of the sources told Reuters, adding regulators in France, Germany and the company’s union need to approve the deal.

The authorities are not expected to object, the sources said on condition of anonymity as the information is confidential.

Tsinghua and Linxens did not respond to requests for comment on the deal, which would be the first overseas investment by the Chinese firm in two years.

According to three sources, Tsinghua has already locked in a deal with four banks for a 1.5 billion euro ($1.75 billion) bridge loan to fund the transaction. Credit Suisse, a main lender in the loan, also advised the seller, the people said.

That followed a 2015 debacle when an informal $23 billion approach for U.S. giant Micron Technology Inc was rejected by the Idaho-based chipmaker amid national security concerns – a rationale that has increasingly been used to block Chinese deals in sensitive U.S. industries.

So far this year, China has spent $45.5 billion on European assets, more than double year-ago levels, while its investments in the United States has dropped 75 percent to $1.9 billion, according to Thomson Reuters data.

Linxens, headquartered close to Paris, has 535 million euros in annual sales and employs 3,500 staff at nine production sites globally. It also has offices in China, Singapore and Thailand.

Linxens, which does not have a U.S. presence according to its website, makes connectors crucial for communication between smart cards and electronic readers.

It also makes antennas and inlays for applications such as contactless payment, transport and access.

Reporting by Kane Wu and Prakash Chakravarti of LPC; additional reporting by Arno Schuetze in Frankfurt and Gwénaëlle Barzic in Paris; Editing by Himani Sarkar