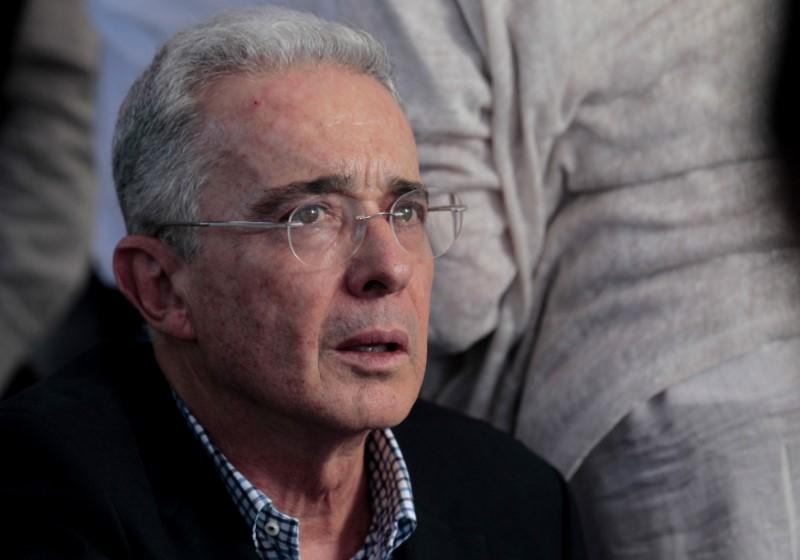 BOGOTA (Reuters) – Former Colombian President Alvaro Uribe resigned his Senate seat on Tuesday after the Supreme Court called on him to testify in an investigation into whether he participated in witness tampering and bribery.

Uribe, who was in office from 2002 to 2010 and mounted a military offensive against Marxist guerrillas, is a mentor of incoming President Ivan Duque, who won the June 17 election as the candidate for Uribe’s right-wing Democratic Center party.

Uribe is under investigation by the court over allegations he made false accusations and tampered with witnesses in a case he himself started by making similar accusations against leftist Senator Ivan Cepeda.

“The supreme court has called me to an inquiry,” Uribe said on Twitter. “I feel morally impeded from being a senator, I will send my resignation letter so that my defense does not interfere with the work of the Senate.”

Uribe’s lawyer did not immediately respond to a request for comment.

In 2012 Uribe accused Cepeda of orchestrating a plot to falsely tie him to right-wing paramilitary groups during jail visits to former fighters.

But in February the Supreme Court, the body charged with investigating criminal matters involving lawmakers, said Cepeda had collected information from former paramilitaries in the course of his Senate work and that he had not paid or pressured them. Instead, the court said, it was Uribe who was at fault.

The activities continued even after the ruling, the court said in a statement on Tuesday.

“As a reaction to that ruling and apparently with his consent, persons allied to the ex-president Uribe began new acts of witness manipulation,” the statement said.

Uribe will be called to respond to accusations of bribery and fraud, the court said, and will have sufficient time to prepare his defense in the criminal case that could possibly lead to jail time for Uribe if he is convicted.

Uribe has remained a polarizing kingmaker in Colombian politics as his party has sought to stymie a peace accord with Marxist rebels. He and his family have long been accused of paramilitary involvement by the opposition, but previous investigations have borne little fruit.

The demobilization of a major paramilitary group during Uribe’s term in office was widely criticized as ineffective.