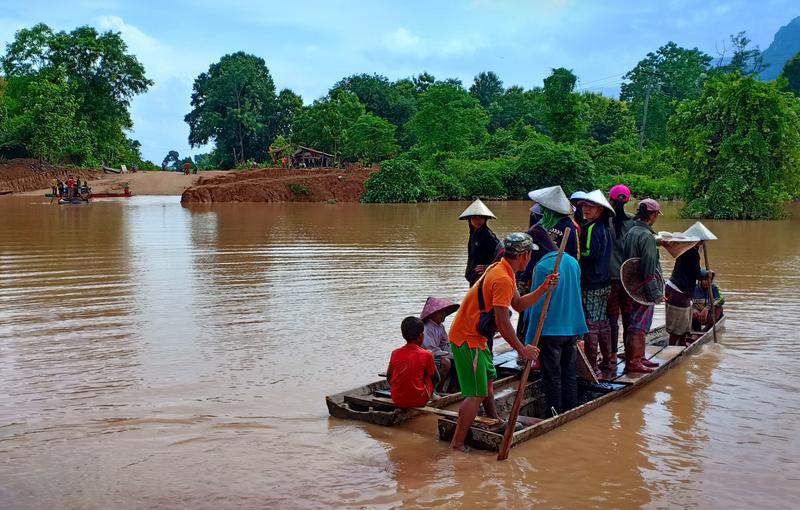 BANGKOK (Reuters) – Rescuers searched in difficult conditions on Wednesday for dozens of people feared dead and hundreds missing after a dam collapsed in a remote part of land-locked Laos, one of Asia’s poorest countries, a government official said.

State media showed pictures of villagers, some with young children, stranded on the roofs of submerged houses. Others showed villagers trying to board wooden boats to safety in Attapeu province, the southernmost part of the country.

A senior Lao government official, who declined to be identified because he was not authorized to speak to the media, said dozens of people were feared dead and hundreds remain unaccounted for after the hydropower dam that was under construction collapsed on Monday.

“We will continue with rescue efforts today but it’s very difficult, the conditions are very difficult. Dozens of people are dead. It could be higher,” the Vientiane-based official told Reuters by telephone.

The once-isolated Southeast Asian country, one of the world’s few remaining communist states, has an ambitious dam-building scheme in order to become the “battery of Asia”.

Its government depends almost entirely on outside developers to build its planned portfolio of dams under commercial concessions that agree to export electricity to its more developed neighbors, including power-hungry Thailand.

Environment rights groups have repeatedly warned about the human and environmental cost of the rapid pace of dam construction, including damage to the already-fragile ecosystem of the region’s rivers.

Attapeu is a largely agricultural province that borders Vietnam to the east and Cambodia to the south.

The dam that collapsed is part of the hydroelectric Xe-Pian Xe-Namnoy power project, which involves Laotian, Thai and South Korean firms. The subsidiary dam, known as “Saddle Dam D”, was part of a network of two main dams and five subsidiary dams.

South Korea’s SK Engineering & Construction said part of a small supply dam was washed away and the company was cooperating with the Laos government to help rescue villagers near the site.

An official at the firm said fractures were first discovered on the dam on Sunday and that the company had ordered the evacuation of 12 villages as soon as it became clear the dam could collapse.

Brian Eyler, director of the Stimson Center’s Southeast Asia program, said a breach of a saddle dam could be “worse in terms of devastation” than that of a main dam.

“With a saddle dam breaking, it’s flushing water into an area that’s not used to having water inside it and it will continue to breach until the water can be diverted again, which is one option, or until the reservoir is drawn down to a level below the breach,” Eyler told Reuters.

“This is yet another major shock to Laos’ plan to become the battery of Southeast Asia,” he said.

Tholakhong, a Lao language news site, said on Tuesday water levels at the gauge in one of the affected villages showed a decrease of 79 cm (31 inches).

Reporting by Amy Sawitta Lefevre in BANGKOK and Fanny Potkin in JAKARTA; Editing by Paul Tait