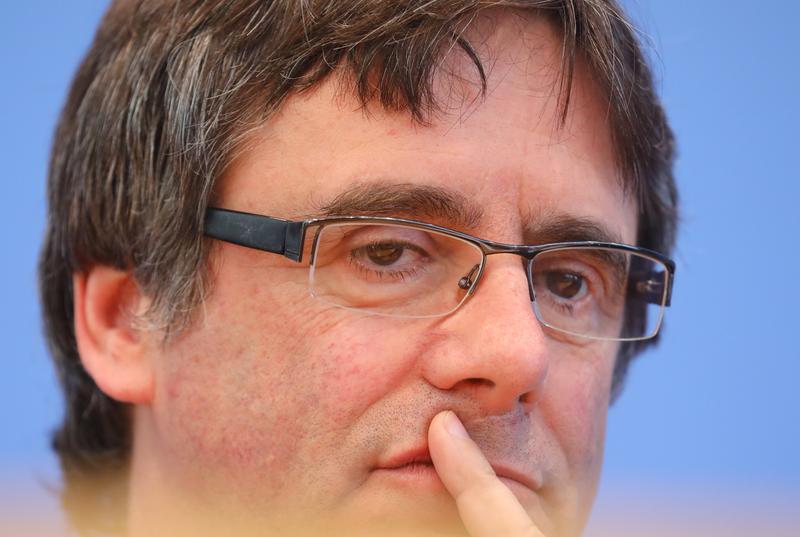 BERLIN (Reuters) – Former Catalan leader Carles Puigdemont, facing charges of rebellion in Spain, said on Wednesday he would return to Belgium from Germany and continue to campaign for the region’s secession.

Spain’s Supreme Court dropped a European arrest warrant for Puigdemont last week after Germany refused to extradite him for declaring the northeastern region’s independence last year, an act that Madrid ruled was illegal.

Puigdemont said he would return to Brussels with his family on Saturday.

Former Catalan leader Carles Puigdemont is greeted by his supporters after a news conference in Berlin, Germany, July 25, 2018. REUTERS/Hannibal Hanschke

“Everyone knows that this is no longer an internal Spanish affair,” he told a news conference in Berlin, adding that the independence campaign he would continue to pursue from Belgium had taken on a European aspect.

Spain’s withdrawal of the arrest warrant offered a clear illustration of the difficulties the country has had trying to persuade its EU partners to cooperate with its attempts to bring former members of Catalonia’s regional government to trial over the secessionist campaign.

Authorities in Madrid removed the government from office in response to the independence declaration, which followed a banned referendum on a split from Spain held in October.

Puigdemont was in Berlin awaiting an extradition order after German authorities arrested him in March at a petrol station in the northern German region of Schleswig-Holstein as he was returning to Belgium after a journey to Finland.

Six members of Puigdemont’s former cabinet are now in jail facing rebellion charges, while he and several others are scattered across Europe from Scotland to Switzerland, where they so far have successfully avoided Spanish efforts to have them sent home.

A German court ruled a week ago that Puigdemont, 55, could be extradited to Spain to face a separate charge for misuse of public funds, but not for the rebellion charge. Under European law, that means Spain would have been barred from trying him on the more serious charge if the extradition were to proceed.

The charges against Puigdemont and the five other former Catalan leaders in self-imposed exile remain in place despite the lifting of the European warrants, meaning they would be arrested if they returned to Spain.