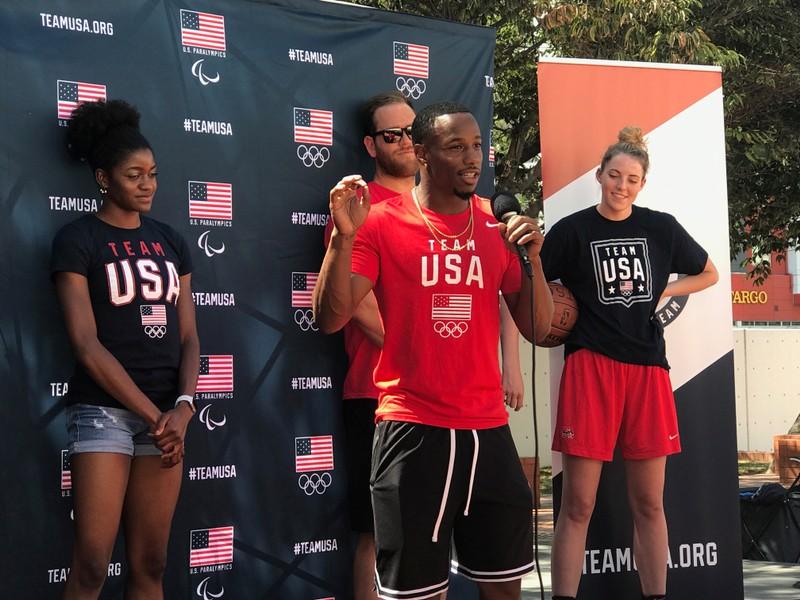 LOS ANGELES (Reuters) – Team USA Rugby wing Carlin Isles had never heard of the sport until six years ago when he came across a video of it online but now the speedy 28-year-old believes it is poised for a breakthrough in the U.S.

Team USA Rugby wing Carlin Isles is flanked by fellow U.S. Olympians as he speaks at an event making the two-year countdown to the Summer Games in Tokyo, in Los Angeles, California, U.S., July 24, 2018. REUTERS/Rory Carroll

Isles told Reuters on Tuesday that the success of the Rugby World Cup Sevens competition in San Francisco last weekend, where organizers sold more than 100,000 tickets to the three-day tournament, shows that Americans are eager to embrace it.

“It has gotten way more popular since I first started in 2012,” said Isles, who was the U.S. national sevens team’s leading scorer at the 2016 Rio Olympics and could very well lead the team again at the Tokyo Games in 2020.

“Kids are starting it at younger ages because of all the new youth camps and clubs plus there is more media attention,” said Isles, who was taking part in the youth sport’s clinic in Los Angeles to mark the two-year countdown to Tokyo.

He said a new generation of Americans will be exposed to the sport as parents become less willing to let their kids play American football due to concussion concerns, he said.

“In rugby you’re not leading with your head so it’s much safer,” he said.

Isles could serve as the prototype of what an American rugby player looks like if the sport continues to grow in the country.

He has the speed of an elite track and field athlete, having run the 100m in 10.24 seconds, and grew up playing American football, where he made the practice squad for the Detroit Lions in 2013.

But when he saw a video of rugby sevens on his computer, he realized the sport suited his talents perfectly.

“In 2012 I was getting ready for the Olympic trials in track and I was studying film when I came across it,” he said.

“I saw the amount of space there was and I figured, I’m fast, I think I could use my gift in this sport.”

He emailed then USA Rugby CEO Nigel Melville, who called him back the next day and convinced him to take up the sport.

Four days later Isles moved to Aspen Colorado to start playing for Aspen RFC and soon set his sights on the Rio Olympics.

Isles, who grew up poor in foster homes in Ohio with his twin sister before being adopted at age seven, told the kids on Tuesday that anything is possible.