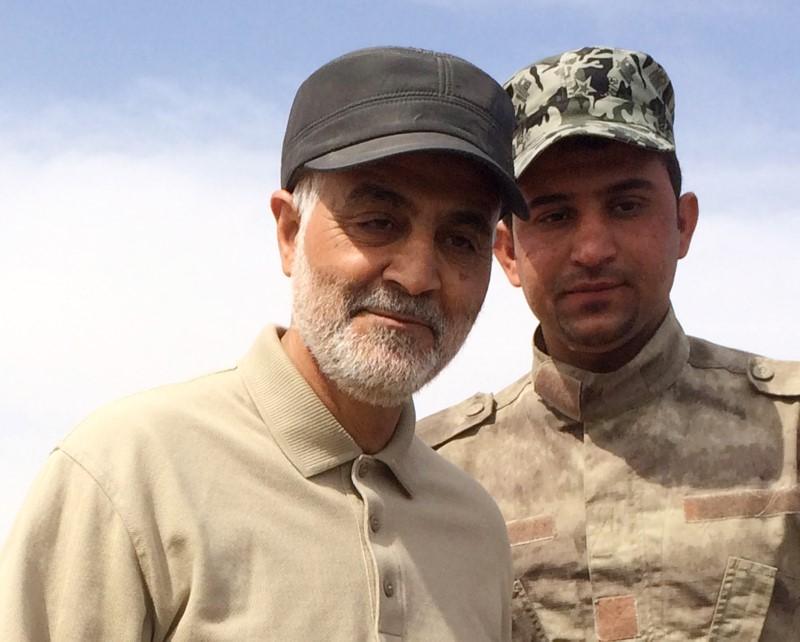 ANKARA (Reuters) – A powerful commander of Iran’s elite Revolutionary Guards said on Thursday Donald Trump should address any threats against Tehran directly to him, and mocked the U.S. president as using the language of “night clubs and gambling halls”.

The comments by Major-General Qassem Soleimani, who heads the Quds Force of the Guards, were the latest salvo in a war of words between the two countries.

“As a soldier, it is my duty to respond to your threats … If you wants to use the language of threat … talk to me, not to the president (Hassan Rouhani). It is not in our president’s dignity to respond to you,” Soleimani was quoted as saying by Iran’s semi-official Tasnim news agency.

Soleimani’s message was in essence a warning to the United states to stop threatening Iran with war or risk exposing itself to an Iranian response.

“We are near you, where you can’t even imagine… Come. We are ready … If you begin the war, we will end the war,” Tasnim news agency quoted Soleimani as saying. “You know that this war will destroy all that you possess.”

Israel’s Energy Minister Yuval Steinitz said the fiery rhetoric of Soleimani was only “empty talk” because Iran was aware of “the strength and might of the U.S. military”.

On Sunday night, Trump said in a tweet directed at Rouhani: “Never, ever threaten the United States again or you will suffer consequences the likes of which few throughout history have ever suffered before. We are no longer a country that will stand for your demented words of violence & death. Be cautious!”

A few hours earlier, Rouhani had addressed Trump in a speech, saying that hostile U.S. policies could lead to “the mother of all wars”.

Fanning the heightened tensions, U.S. national security adviser John Bolton said in a statement on Monday: “President Trump told me that if Iran does anything at all to the negative, they will pay a price like few countries have ever paid before.”

Bolton is a proponent of interventionist foreign policy and was U.S. ambassador to the United Nations in the administration of George W. Bush during the Iraq war.

“You (Trump) threaten us with paying a price like few countries have ever paid. Trump, this is the language of night clubs and gambling halls,” said Soleimani, who as Quds Force commander is in charge of the Revolutionary Guards’ overseas operations.

Iran’s Guards commanders have threatened to destroy U.S. military bases across the Middle East and target Israel, which Iran refuses to recognize, within minutes of being attacked.

Since Trump’s decision in May to withdraw the United States from a 2015 nuclear agreement between Iran and world powers, Tehran’s clerical establishment has been under increasing U.S. pressure and the prospect of possible sanctions.

Washington aims to force Tehran to end its nuclear program and its support of militant groups in the Middle East, where Iran is involved in proxy wars from Yemen to Syria.

Despite the bellicose rhetoric, there is limited appetite in Washington for a conflict with Iran, not least because of the difficulties the U.S. military faced in Iraq after its 2003 invasion but also because of the impact on the global economy if conflict raised oil prices.

Mounting U.S. economic pressure, a faltering economy, sliding currency and state corruption are rattling Iran’s clerical rulers, but analysts and insiders rule out any chance of a seismic shift in Iran’s political landscape.

“This is a war of words. Neither side want a military confrontation. But of course, if America attacks Iran, our response will be crushing,” a senior Iranian official, who asked not to be named, told Reuters.

Trump suggested on Tuesday that talks with Iran were an option, saying “we’re ready to make a real deal”. But Iran rejected it.

“But eventually, within a few months, half a year, they’ll have no choice and will return to negotiation table with the United States and give up their nuclear program,” Yuval told Israeli Reshet TV on Thursday.

While the United States is pushing countries to cut all imports of Iranian oil from November, Iran has warned of counter-measures and has threatened to block Gulf oil exports if its own exports are halted.

“The Red Sea which was secure is no longer secure today with the presence of American forces,” Soleimani said.

Saudi Arabia said on Thursday it was temporarily halting all oil shipments through the Red Sea shipping lane of Bab al-Mandeb after an attack on two oil tankers by Yemen’s Iran-aligned Houthi movement.