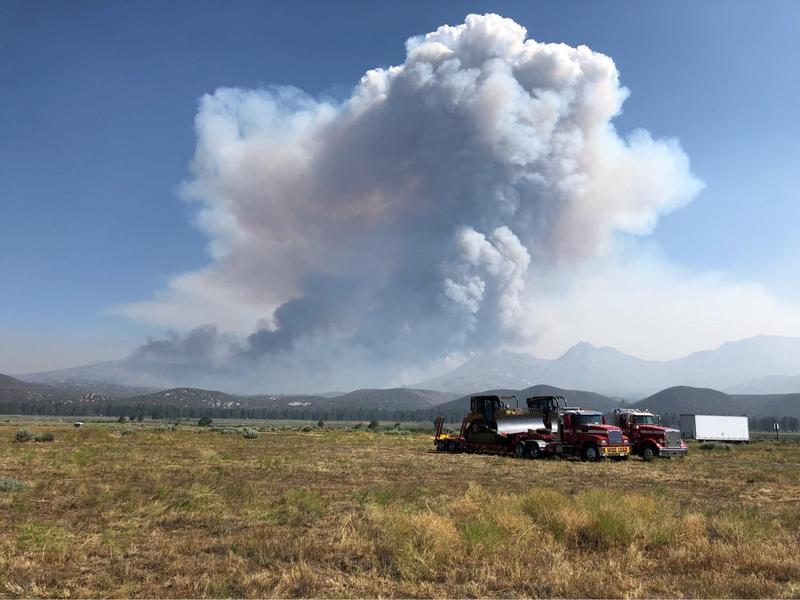 LOS ANGELES (Reuters) – A fast-moving Southern California wildfire believed to have been set by a suspected serial arsonist forced 3,000 residents of mountain resort communities to flee their homes on Thursday as crews fought to save homes in the path of the flames.

Smoke from the Cranston Fire is shown from east of Lake Hemet in Riverside County, California, U.S., July 26, 2018. USFS/Handout via REUTERS

The Cranston Fire was one of several wildland blazes that erupted on Wednesday in Riverside County, east of the city of Hemet, that authorities said appeared to have been set by the same suspect.

Brandon McGlover, 32, was taken into custody in Hemet on Wednesday and booked on five counts of arson, the U.S. Forest Service said in a statement on the Inciweb fire tracking website.

It was not immediately clear if McGlover had retained an attorney.

The Cranston Fire, which has already destroyed at least five homes as it rages at the edge of the San Jacinto Mountains west of Palm Springs, prompted evacuation orders for 3,200 people living in Idyllwild, Cedar Glen and Fern Valley.

Nearly 700 firefighters were battling the conflagration, which had charred 4,700 acres (1,900 hectares) and was only 5 percent contained as of Thursday afternoon.

It was one of five major, uncontained wildfires burning across California during a heat wave that has the state sizzling under record-shattering temperatures.

In Northern California, the Carr Fire forced thousands of residents to flee their homes as crews struggled to contain the blaze in a mountainous area of Shasta County.

That blaze, about 150 miles (240 km) north of Sacramento, had blackened 20,000 acres (8,100 hectares) as of Thursday, three times its size a day earlier. Crews had contained just 10 percent of it, according to the California Department of Forestry and Fire Protection.

The fire was burning in a sparsely inhabited area, but Cal Fire spokesman Scott McLean warned that it was heading toward the city of Redding and its 90,000 people.

“If you live in West Redding start packing and be prepared!” the California Highway Patrol said on Twitter. “This fire is out of control!”

The fires were being supercharged by temperatures above 100 degrees F (37 C), erratic winds and low humidity.

The 43,300-acre (17,500-hectare) Ferguson Fire has forced Yosemite National Park to close a visitor hub as it pours thick black smoke into the valley 170 miles (275 km) east of San Francisco.

That blaze, burning in steep, rugged terrain, has proven dangerous for crews. A firefighter was killed on July 14 when a bulldozer he was using to cut containment lines overturned, and seven others have been hurt.

Reporting by Dan Whitcomb; Additional reporting by Brendan O’Brien in Milwaukee and Makini Brice in Washington; Editing by Tom Brown and Peter Cooney