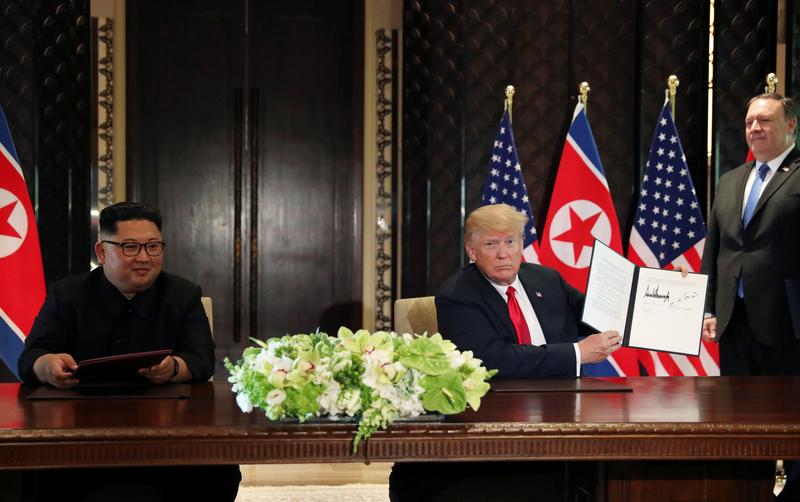 SEOUL (Reuters) – Washington’s reluctance to declare an end to the Korean War until after North Korea abandons its nuclear arsenal may put it at odds not only with Pyongyang, but also with allies in South Korea.

FILE PHOTO: U.S. President Donald Trump shows the document, that he and North Korea’s leader Kim Jong Un signed acknowledging the progress of the talks and pledge to keep momentum going, after their summit at the Capella Hotel on Sentosa island in Singapore June 12, 2018. At right is U.S. Secretary of State Mike Pompeo. REUTERS/Jonathan Ernst/File Photo

The 1950-1953 Korean War ended in an armistice rather than a peace treaty, leaving the U.S.-led United Nations forces technically still at war with North Korea.

Friday marks 65th anniversary of the truce, which will be commemorated by the United Nations Command in a ceremony in the fortified demilitarized zone that has divided the two Koreas since the war. North Korean veterans of the war, which left more than 1.2 million dead, will gather in Pyongyang for a conference.

In their April summit, the leaders of North and South Korea agreed to work this year with the United States and China, which also played a major role in the war, to replace the armistice with a peace agreement.

In June, U.S. President Donald Trump and North Korean leader Kim Jong Un signed a statement saying they would seek “to establish new U.S.–DPRK relations in accordance with the desire of the peoples of the two countries for peace and prosperity,” using the initials of the North Korea’s official name, the Democratic People’s Republic of Korea.

Kim has broadly committed to the “denuclearisation of the Korean peninsula” if the United States and its allies drop their “hostile” policies and the North has made clear it sees an official end to the state of war as crucial to lowering tensions.

Many experts and officials in Washington, however, fear signing a peace deal first could erode the international pressure they believe led Kim to negotiate. It could also endanger the decades-long U.S. military alliance with South Korea, and may undermine the justification for the U.S. troops based on the peninsula.

North Korea says it has taken steps to halt its nuclear development, including placing a moratorium on missile and nuclear bomb testing, demolishing its only known nuclear test site, and dismantling a rocket facility.

A spokesperson for the U.S. State Department said while “peace on the Korean Peninsula is a goal shared by the world,” the international community would not accept a nuclear armed North Korea.

“As we have stated before, we are committed to building a peace mechanism with the goal of replacing the Armistice agreement when North Korea has denuclearised,” the spokesperson said in an emailed statement.

DOUBTS ON BOTH SIDES

In recent weeks Pyongyang has renewed calls for a declaration of the end of the war, calling it the “first process for peace” and a key way the United States can add heft to its guarantees of security.

“The adoption of the declaration on the termination of war is the first and foremost process in the light of ending the extreme hostility and establishing new relations between the DPRK and the U.S.,” North Korean state media said in a statement on Tuesday.

After Pompeo visited Pyongyang in June for talks, state media quoted a spokesman for the North’s Ministry of the Foreign Affairs criticizing the U.S. delegation for not mentioning the idea of a peace regime.

“It seems quite obvious that even if North Korea is negotiating sincerely, they aren’t going to be willing to give up their nuclear capacity in the absence of a peace system that gives them regime security,” Green said.

Many officials in Washington appeared concerned that an early declaration of peace could lead to the collapse of the U.S.-South Korea alliance with calls for U.S. troops to leave the Korean peninsula, he added.

While South Korean officials say they are committed to the full denuclearisation of North Korea, they have shown more flexibility in the timing of a peace agreement than their U.S. allies.

South Korea’s Unification Minister Cho Myoung-gyon said on Tuesday it is possible to declare an end to war this year.

“We are in consultations with the North and the United States in that direction,” he told a parliamentary session, adding that a three-way declaration would be part of an initial phase of denuclearisation.

China says it open to participating in the process.

He did not elaborate on any possible timetable.

Additional reporting by Hyonhee Shin in Seoul, and Ben Blanchard in Beijing. Editing by Lincoln Feast.