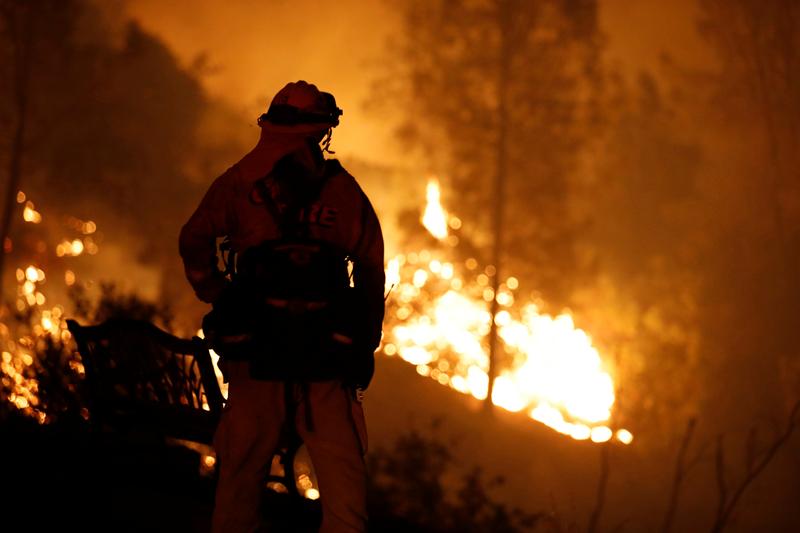 REDDING, Calif. (Reuters) – A fast-growing northern California wildfire killed a second firefighter on Friday after high winds drove it into the city of Redding, prompting mass evacuations, destroying scores of homes and threatening some 5,000 other dwellings and businesses, officials said.

Flames raging in California’s scenic Shasta-Trinity area erupted late Thursday into a firestorm that jumped across the Sacramento River and swept into the western side of Redding, home to about 90,000 people, forcing residents to flee for their lives.

Firefighters and police “went into life-safety mode,” hustling door to door to usher civilians out of harm’s way, said Scott McLean, a spokesman for the California Department of Forestry and Fire Protection (CalFire).

Gale-force winds on Thursday night whipped the blaze into a frenzy, creating fire tornadoes that uprooted trees and tore into structures. “It was like a Tasmanian devil,” McLean told Reuters.

Such highly erratic, storm-like wildfires, burning so intensely that typical barriers such as rivers and highways fail to halt their advance, have grown more commonplace, McLean said.

They also seem to be occurring more often at night, as with wind-driven conflagrations that devastated parts of Santa Rosa in the heart of California wine country in October and swept Ventura and Santa Barbara counties in December.

Cooler weather, higher humidity and calmer winds that normally prevailed after the sun sets could once be counted on to help tamp down flames, but McLean said extreme winds are happening with greater frequency after dark.

Some 37,000 people remained under evacuation orders on Friday, as flames continued to burn in pockets of the city’s west side, he said.

CalFire reported 65 structures destroyed by the blaze, but McLean called that tally a “placeholder” figure that would grow significantly, with the number of homes lost likely to run into “the hundreds” as the scope of devastation was fully assessed.

Nearly 5,000 homes were listed by CalFire as threatened.

The Carr Fire’s footprint grew by 60 percent overnight and by Friday morning had scorched 44,450 acres (18,000 hectares), CalFire officials said. The blaze was just 3 percent contained as ground crews, water-dropping helicopters and airplane tankers battled the flames for a fifth day.

A curtain of smoke and flames loomed over low-slung buildings in Redding early on Friday, with forecasts calling for wind gusts of 25 miles (40 km) per hour and temperatures of 110 degrees Fahrenheit (43 Celsius).

CalFire spokesman Scott Kenney said triple-digit temperatures not only help stoke the fires, but slow down crews battling them.

“Stress, as far as heat exhaustion and heat stroke, are really serious situations that a firefighter can get into,” he said.

The Carr Fire was one of nearly 90 large blazes burning nationally, most of them in the West. One of those prompted the closure of much of Yosemite National Park in California.

The blaze in Redding on Thursday killed a bulldozer operator working with fire teams to clear brush around the fire. A member of the Redding Fire Department was also reported killed on Friday. A Redding hospital said it had treated eight people, including three firefighters.

Rob Wright, 61, and his wife stayed to fight off flames with a high-powered water hose.

“We were fortunate enough that the wind changed hours ago, and it is pushing the fire back,” said Wright early on Friday. “We are just waiting it out … crossing our fingers and hoping for the best.”

Video and images posted on social media showed flames engulfing structures, as an orange glow lit up the night sky.

Roads out of Redding, about 150 miles (240 km) north of Sacramento, were jammed overnight as motorists rushed to escape.

More than 3,000 customers had lost power in the area, according to utility PG&E.

The Carr Fire was one of three fierce blazes threatening large populated areas.

A 32-year-old man was charged with setting the Cranston fire along with eight others. Brandon N. McGlover faces a potential life sentence if convicted of the charges and is being held on a $1 million bond.