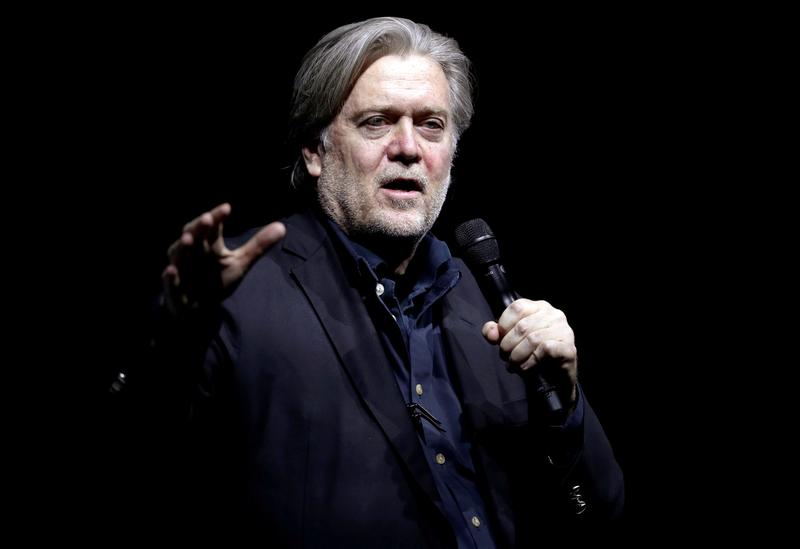 LONDON (Reuters) – U.S. President Donald Trump’s former political strategist Steve Bannon has been in contact with three potential rivals to British Prime Minister Theresa May and will make another trip to Europe in August, he told Reuters in an interview.

Bannon, a former chairman of the right-wing Breitbart.com website and an architect of Trump’s 2016 election win, has launched a project to coordinate and bolster the anti-EU vote across the European Union.

He held a series of meetings in London this month after launching a Brussels-based political organization he says is intended to undermine, and ultimately paralyse, the EU.

In an interview on Thursday, Bannon said he would travel to Europe again soon and would use his organization to campaign aggressively to install a large, anti-European Union faction in the European Parliament in elections next May.

He said he was already raising funds from unspecified European sources and that his foundation would help nationalist movements around Europe to build up their polling, messaging and political “analytics” capabilities.

Bannon said Britain’s departure from the European Union was “fundamentally going to change” European politics and forecast it would fuel a substantial anti-EU result in the European Parliament elections.

Prime Minister May’s plans to leave the EU, which include Britain keeping a close trading relationship with the bloc on goods, have left her politically vulnerable.

A poll this week showed the plans are overwhelmingly opposed by the British public and more than a third of voters would support a new right-wing party committed to quitting the bloc. The survey also found voters would prefer Boris Johnson, who quit as foreign minister this month, to negotiate with the EU and lead the Conservative Party into the next election.

Bannon said he had been in direct contact with Johnson and two other potential challengers to May: Michael Gove, who is still a member of May’s cabinet, and Jacob Rees-Mogg, a leader of an anti-EU Conservative Party faction.

The three are among the most prominent members of a section of the party which campaigned forcefully to leave the EU.

“Boris Johnson is one of the most important persons on the world stage today,” Bannon said. He described Johnson as “his own guy” and said he had “texted a lot” with him and spoken by phone with him during this month’s London trip.

Bannon said he had been in contact some time ago with Gove and had also been in touch with Rees-Mogg. The three represented a “deep talent bench” of potential anti-EU leaders for the Conservative Party, Bannon said.

Johnson and Rees-Mogg did not immediately respond to emails requesting comment on their contacts with Bannon. A spokesman for Gove said the British politician had once briefly encountered Bannon and that two meetings to discuss U.S. politics had been explored but never took place.

“Michael has never had a meeting with Mr Bannon or discussed these issues with him,” Gove’s spokesman said in an emailed response to a Reuters question on whether the two men had discussed anti-EU politics.

Bannon said he was already engaging pollsters and “working on messaging” for next May’s European Parliament campaign.

Eurosceptic parties could expand their strength by over 60 percent at the elections next May, according to a survey by Reuters this week of national opinion polls.

Reporting By Mark Hosenball in London; Editing by Nick Tattersall