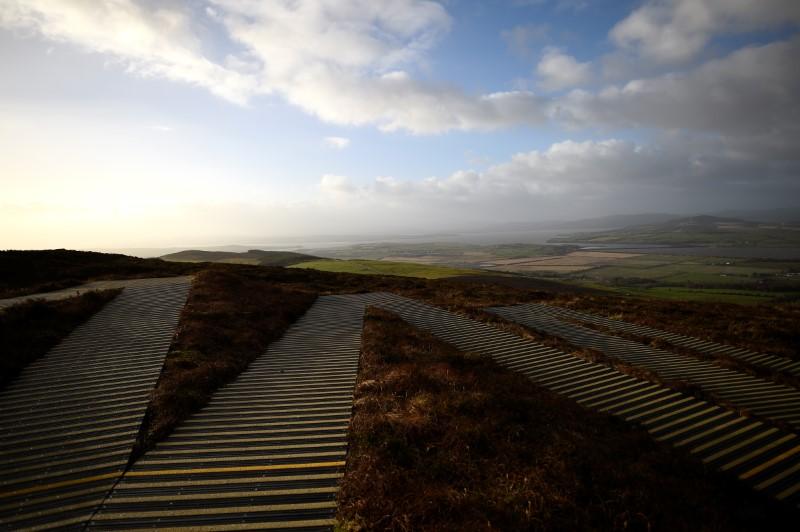 BRUSSELS (Reuters) – The British government has so far failed to offer a “workable” backstop plan to avoid Brexit border frictions in Ireland and must do so now if the European Parliament is to endorse a smooth transition out of the EU, lawmakers warned on Friday.

Zig-zag steps lead up to the prehistoric stone fort of Grianan of Aileach where you can view the border between Ireland and Northern Ireland, seen from near the border village of Speenogue, Ireland, February 1, 2018. REUTERS/Clodagh Kilcoyne

After briefings by EU negotiators and reviewing British statements, the European Parliament’s Brexit Steering Group made clear that Prime Minister Theresa May’s White Paper this month setting out how future EU-UK trade relations would avert customs and other disruptions on the divided island was not acceptable.

The statement came a day after chief EU negotiator Michel Barnier told visiting British Brexit Secretary Dominic Raab that a key element of the plan involving Britain collecting customs duty for the EU must be changed and repeated scepticism about May’s efforts to extend to the British mainland special customs arrangements which the EU is willing to offer Northern Ireland.

Echoing that and noting May’s commitment in March to come up with a so-called backstop wording for a withdrawal treaty to be concluded before Brexit in March, the BSG said: “The backstop remains specific to the unique circumstances of the island of Ireland and … cannot establish the terms of the future relationship between the European Union and the United Kingdom.

“It is incumbent on the UK that it no longer postpone coming forward with its own, workable and legally operative proposal for a backstop. The BSG stresses that without a credible, genuine and operational backstop, it will be impossible for the European Parliament to give its consent to the [treaty].”

Without ratification of that withdrawal agreement, Britain would not have the orderly Brexit, including a status quo transition period, which has otherwise largely been agreed.

Guy Verhofstadt, the former Belgian prime minister who chairs the BSG, said: “We have yet to see a legislative proposal from the UK government, despite repeated commitments made by Prime Minister May.

“Any suggestion that the UK government will renege on the commitments it has already made only risk to undermine trust and sabotage negotiations.”