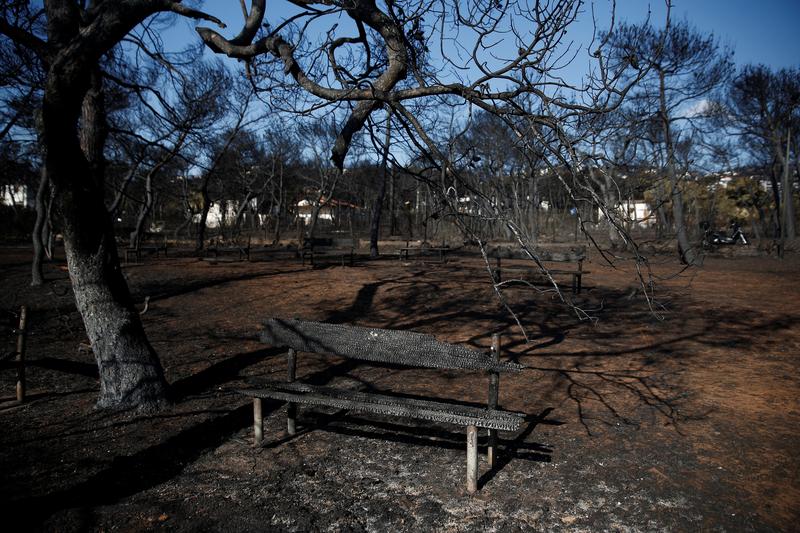 ATHENS (Reuters) – Greece’s Prime Minister Alexis Tsipras took political responsibility on Friday for a wildfire that killed at least 87 people and led to opposition accusations that the government failed to protect lives.

Tsipras’ opponents went on the offensive on Friday as three days of mourning ended, accusing the government of failing to apologize for the disaster.

Seeking to deflect public anger, Tsipras told ministers he was conflicted over whether the authorities had done everything right in response to the disaster.

“I have called you here today first of all to take full political responsibility for this tragedy in front of my cabinet and the Greek people,” he said.

“I won’t hide that I am overwhelmed by mixed feelings right now … Pain, devastation for the human lives unexpectedly and unfairly lost. But also anguish at whether we acted correctly in everything we did.”

Tsipras’ contrition comes after the main opposition New Democracy party criticized a government news conference on Thursday night where not one word of apology was heard.

Civil Protection Minister Nikos Toskas told the news conference that the government suspected arson was behind Monday night’s blaze, which trapped dozens of people in their cars trying to escape a wall of flames.

Survivors of one of the worst Greek disasters in living memory, which hit the town of Mati, some 30 km (17 miles) east of Athens on Monday, heckled Tsipras’ coalition partner, saying they had been left to fend for themselves.

Pressure is growing on the government, which is trailing New Democracy in opinion polls, at a time when it had hoped to finally extricate Greece from years of bailouts prompted by its debit crisis and reap the political benefits.

Tsipras now faces questions over how so many got trapped in the fire as the death toll could rise still further.

Tsipras had not been seen in public since Tuesday, when he declared the three days of national mourning for the dead.

A burnt bench is seen in a camping following a wildfire in the village of Mati, near Athens, Greece, July 27, 2018. REUTERS/Costas Baltas

Politicians’ criticism reflected anger among the survivors. “They left us alone to burn like mice,” Chryssa, one of the survivors in Mati, told Skai television. “No one came here to apologize, to submit his resignation, no one.”

Toskas said he had offered his resignation but Tsipras rejected it.

“Why didn’t they protect the people by implementing on time the available plan for an organized and coordinated evacuation in the areas that were threatened?” she said.

The government has announced a long list of relief measures including a one-off 10,000 euro ($11,600) payment for families of the victims. Their spouses and near relatives were also offered public sector jobs.

But many felt that was not enough to ease the pain and had wanted authorities to assume responsibility for the scale of the devastation.

About 300 fire fighters and volunteers were still combing the area on Friday for those still missing. More than 500 homes were destroyed by the blaze.

Haphazard and unlicensed building, a feature of many areas across Greece, was also blamed. Many routes to the beach were walled off.

Tsipras promised a national plan to tackle decades of unauthorized construction and to reform and upgrade the Civil Protection Service “to guarantee … that there will be no more tragedies”.

Mortuary staff in Athens, shocked at the sight of burnt bodies including children, were expected to conclude post-mortems on Friday after relatives of victims provided information and blood samples which could assist identifications.

The fire broke out on Monday at 4:57 p.m. and spread rapidly through Mati tmsnrt.rs/2K6N3Qc, which is popular with local tourists.

Firefighters described a rapid change in the direction of the wind, which also picked up speed, and some suggested the thick covering of pine trees and a mood of panic were a deadly combination that would have been hard to combat.