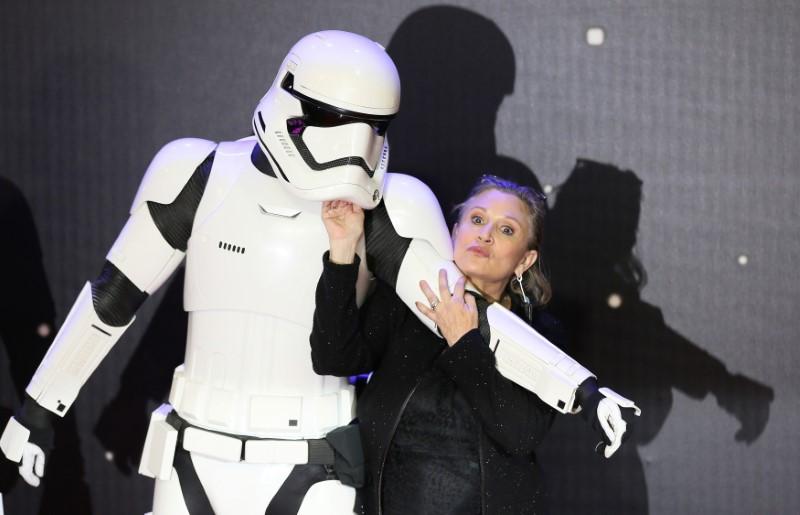 LOS ANGELES (Reuters) – Carrie Fisher will be featured in the next “Star Wars” movie, using previously unseen footage she recorded before her death, Walt Disney Co. studio said on Friday.

FILE PHOTO: Carrie Fisher poses for cameras as she arrives at the European Premiere of Star Wars, The Force Awakens in Leicester Square, London, on December 16, 2015. REUTERS/Paul Hackett/File Photo

Actor Mark Hamill, whose Luke Skywalker character appeared to die in last year’s “Star Wars: The Last Jedi,” will also appear in the next movie, which will start filming in London on Aug. 1, Disney said in a statement.

Fisher, who played Princess Leia, died suddenly in December 2016 at age 60 after suffering a heart attack just as she was enjoying a career revival with the re-invigorated “Star Wars” movie franchise that reunited her with original cast members Hamill and Harrison Ford in the 2015 film “Star Wars: The Force Awakens.”

She had just finished shooting “The Last Jedi” and Leia was to have been the central character in the ninth film in the sci-fi franchise, “Star Wars: Episode IX.”

“Finding a truly satisfying conclusion to the Skywalker saga without her eluded us. We were never going to recast, or use a CG (computer-generated) character. With the support and blessing from her daughter, Billie, we have found a way to honor Carrie’s legacy and role as Leia in Episode IX by using unseen footage we shot together in Episode VII,” he added, referring to “Force Awakens.”

Disney said after Fisher’s death that the script for the ninth movie was being reworked.

Billy Dee Williams will reprise his role as scoundrel Lando Calrissian, who was first seen in 1980’s “The Empire Strikes Back” and 1983’s “Return of the Jedi,” the Disney statement added.

“Episode IX,” which has yet to get a formal title, is due to arrive in movie theaters worldwide in December 2019.

Disney and Lucasfilm announced last year that the release date for “Episode IX” had been pushed back six months to December 2019 and that Abrams had been hired to write and direct after the departure of original director Colin Trevorrow.

The “Star Wars” franchise is among the most valuable film properties in the world. “The Force Awakens” took in more than $2 billion at the global box office while “The Last Jedi” raked in $1.3 billion.