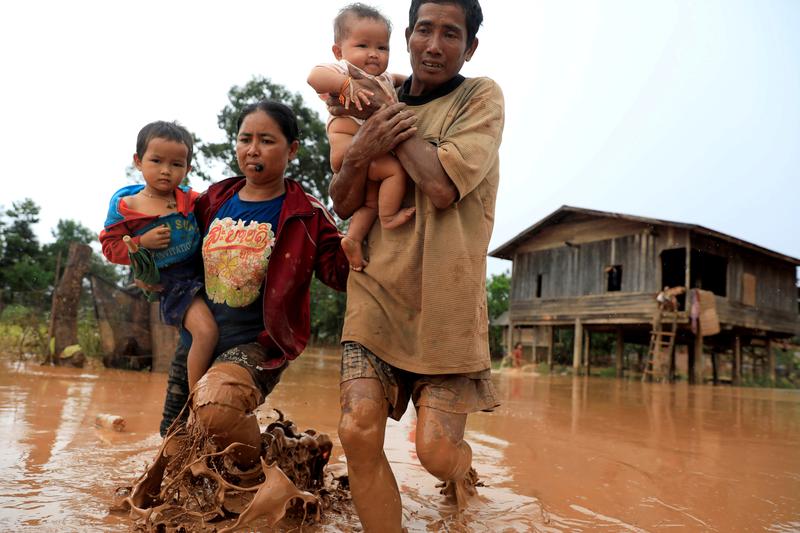 KOKHONG, Laos (Reuters) – The first warning came at 4.00 p.m., one hour later the water started to flow through the village, and by late evening it was a torrent.

Parents carry their children as they leave their home during the flood after the Xepian-Xe Nam Noy hydropower dam collapsed in Attapeu province, Laos July 26, 2018. REUTERS/Soe Zeya Tun

Inpon Sivatan was at home on Monday afternoon when the village chief knocked on his door to warn that their remote hamlet in the southern tip of Laos was about to be flooded.

“The water came really fast. It just rushed through the village,” said Inpon, 55, as he tidied his house in Khokong, one of seven villages that was all but obliterated when a nearby hydropower dam collapsed on Monday, sending a wall of water crashing across mountains, jungle and rural communities.

“I’ve lived here for 32 years and I’ve never seen anything like this,” Inpon said.

A medical official in a nearby settlement, who asked not to be named, said locals received an alert about three to four hours before the dam burst but few took it seriously and did not expect the water to rise as high as it did.

The Xe-Pian Xe-Namnoy Power Company, a hydropower project that involves Laotian, Thai and South Korean firms, on Monday told local officials in a letter written in English that one of its subsidiary dams was “unsafety” and had started to overflow, and requested that they inform downstream villages.

Parents carry their children as they leave their home during the flood after the Xepian-Xe Nam Noy hydropower dam collapsed in Attapeu province, Laos July 26, 2018. REUTERS/Soe Zeya Tun

It was not clear what time the letter, a copy of which was seen by Reuters, was delivered.

At 8:00 p.m. that evening, according to state media, Saddle Dam D – part of a network of two main dams and five subsidiary dams – failed, and the deluge began.

The scale of the disaster in the southern province of Attapeu was still unclear on Friday, in part because of the inaccessibility of the area but also because reports from the isolated and poverty-stricken country’s state media have been scant, sketchy and sometimes inconsistent.

But in Khokong, the scale of the damage was palpable. Every inch of this sleepy farming community was covered in a swamp of viscous, burnt-orange mud. A dead baby water buffalo lay motionless, its head buried in the thick clay. Dogs still trapped in wooden stilt houses howled for their owners.

“I lost everything,” said Inpon, who tried in vain to rescue his car by driving it to the highest point in the village – a nearby petrol station. “There was not enough time to get out”.

“My pigs, my crops. My house is ruined”.

The unstoppable force of the water released from the dam devastated the meager road between Khokong and its nearest big town, Attapeu, complicating rescue efforts to bring food and water across dangerous, muddied, roads and the search for trapped survivors.

The Lao army has set up checkpoints to filter the deluge of well-wishing volunteers who have driven overland from other parts of Laos and from neighboring Thailand into the secretive communist country.

Some of those volunteers have donated a rag-tag armada of wooden fishing boats, jet-skis and inflatable banana boats to navigate the sea of mud so rescuers can ferry drinking water to villages like Khokong.

As Inpon fruitlessly mopped the porch of his waterlogged house, a young family evacuated their stilt home in the rain. Outside, two young girls used a broken oar to steer mud-sodden mattresses like rafts.

Initial reports had suggested the death toll from the burst dam could climb to several hundred, and on Wednesday the Vientiane Times reported some 3,000 people were still waiting to be rescued from swirling floodwaters, many of them on trees and the rooftops of submerged houses.

But official media reported on Thursday that 27 people were confirmed dead, 131 were missing, and all those who were stranded had been plucked to safety. On Friday, the Vientiane Times reported that the official death toll had risen to four.

“I heard some people died but I haven’t seen any bodies,” said Inpon. “I just stayed with my house”.