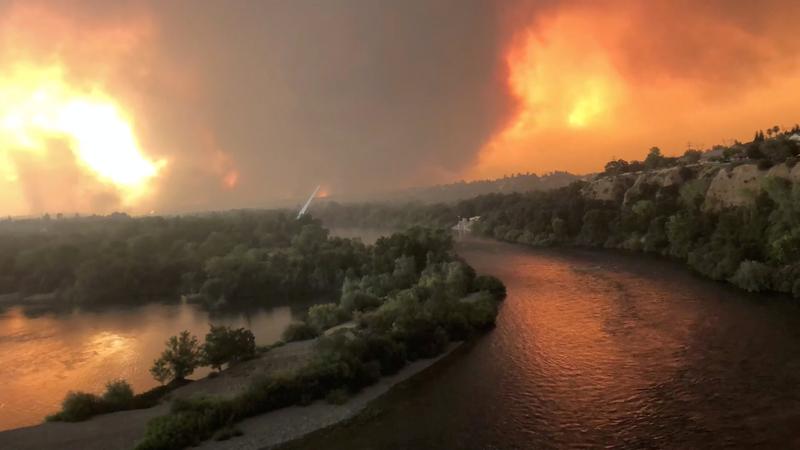 (Reuters) – One person was killed in a rapidly moving wildfire that sent residents fleeing from a northern California city on Friday as flames burned homes and businesses and knocked out power, fire officials said.

Smoke and flames are seen as a wildfire spreads through Redding, California, the U.S., July 26, 2018, in this still image taken from a video obtained from social media. Cody Markhart/via REUTERS

A bulldozer operator was killed in the so-called Carr Fire, a blaze in Shasta County that has tripled in size in the last two days to 28,000 acres (11,300 hectares), the state’s forestry and fire protection department said.

The blaze has crossed the Sacramento River and now threatens hundreds of homes on the western fringes of the city of Redding, fire officials said.

Smoke and flames are seen as a wildfire spreads through Redding, California, the U.S., July 26, 2018, in this still image taken from a video obtained from social media. @pbandjammers/via REUTERS

“The fire is moving so fast that law enforcement is doing evacuations as fast as we can. There have been some injuries to civilians and firefighters,” California Department of Forestry and Fire Protection spokesman Scott McLean told the Sacramento Bee newspaper.

Local and state fire officials were not available to confirm details of injuries.

Roads out of the city of 90,000 people were jammed with motorists trying to escape the flames, social media postings showed.

Smoke from the Cranston Fire is shown from east of Lake Hemet in Riverside County, California, U.S., July 26, 2018. USFS/Handout via REUTERS

More than 1,700 firefighters were battling the blaze, Cal Fire said in an evening advisory.

“Right now they’re doing what they can, they’re trying to make a stand where they can, if possible,” McLean said. “It’s extreme. It’s blowing up off and on again.”

McLean added the wildfire was in an area of rolling hills and not in “house-to-house neighborhoods.”

Multiple power outages were reported, the city said on its website, adding that the electric utility was shutting off power in its northern areas.

California Governor Jerry Brown declared a state of emergency in Shasta and Riverside Counties on Thursday over the Carr and Cranston fires, which were being supercharged by temperatures above 100 degrees F (37 C), erratic winds and low humidity.

Reporting by Brendan O’Brien in Milwaukee; Editing by Clarence Fernandez