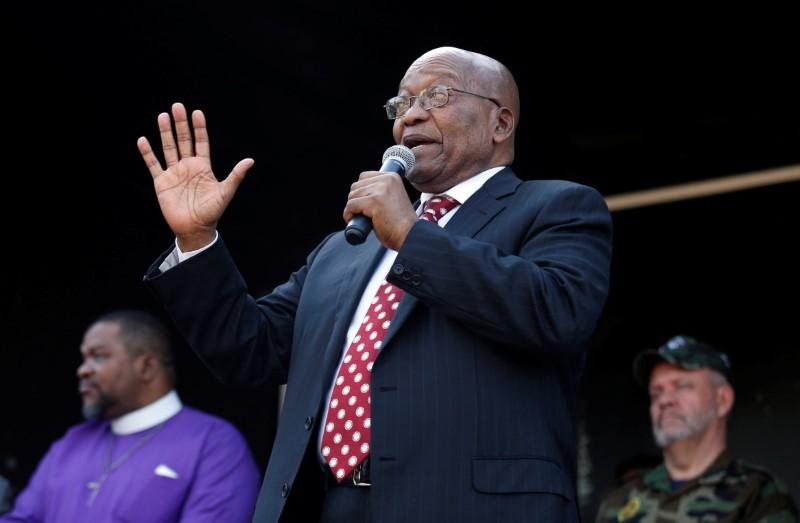 JOHANNESBURG (Reuters) – South Africa’s former president Jacob Zuma arrived at the Pietermaritzburg High Court on Friday for his third appearance on corruption charges relating to a $2.5 billion arms deal in the late 1990s.

Zuma, who was ousted by the ruling party in February, faces 16 charges of fraud, racketeering and money laundering relating to a deal to buy European military hardware to upgrade South Africa’s armed forces after the end of apartheid in 1994.

The case is a rare example of an African leader being held to account for his actions. Zuma denies any wrongdoing.

State prosecutors and Zuma’s lawyers are expected to argue over a start date for the trial. Dressed in a dark suit and red tie, the former president was seen in court shaking hands with his supporters before sitting down.

Dozens of his supporters held an overnight vigil in the city and hundreds marched to court through the streets of Pietermaritzburg, the capital and second-largest city in the KwaZulu-Natal province, chanting support for Zuma.

Some said the former president, whose nine years in power were marked by economic stagnation and credit rating downgrades, is the victim of a politically motivated witch-hunt.

They carried placards emblazoned with the words: “100% behind H.E. Zuma” and “Solid ANC Leader”.

The speed with which prosecutors have moved against Zuma is a sign of his waning influence since he was replaced as head of state by Cyril Ramaphosa, his former deputy, four months ago.

Ramaphosa has made the fight against corruption a top priority as he seeks to woo foreign investment and revamp an ailing economy.