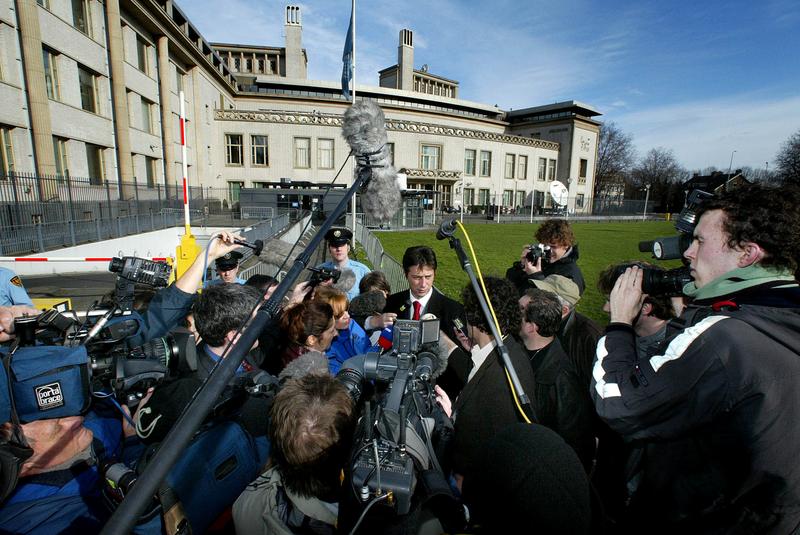 BELGRADE (Reuters) – A prominent Belgrade lawyer who in the past helped to defend late Serbian strongman Slobodan Milosevic was shot dead, gangland-style, in front of his home on Saturday, police said.

FILE PHOTO: Dragoslav Ognjanovic, adviser to Slobodan Milosevic, is surrounded by media during a break on the second day of the trial against Milosevic at the International Criminal Tribunal for the former Yugoslavia at The Hague, February 13, 2002. REUTERS/Paul Vreeker/File Photo/File Photo

Dragoslav Ognjanovic, 57, was gunned down in front of his apartment building in the Novi Beograd neighborhood and his 26-year-old son was wounded in the right arm, the Interior Ministry said in a statement.

As a prominent criminal lawyer, Ognjanovic served in the early 2000s on a legal team that helped to defend Milosevic at his war crimes trial before the U.N. tribunal for former Yugoslavia in The Hague. Milosevic died in the tribunal’s detention unit in 2006 before a verdict was reached.

Over the years, Ognjanovic also defended some of Serbia’s leading underworld figures.

Several prominent members of Serbian and Montenegrin organized crime networks have been killed in Belgrade in the past two years in what police describe as a turf war over the illegal drugs market.