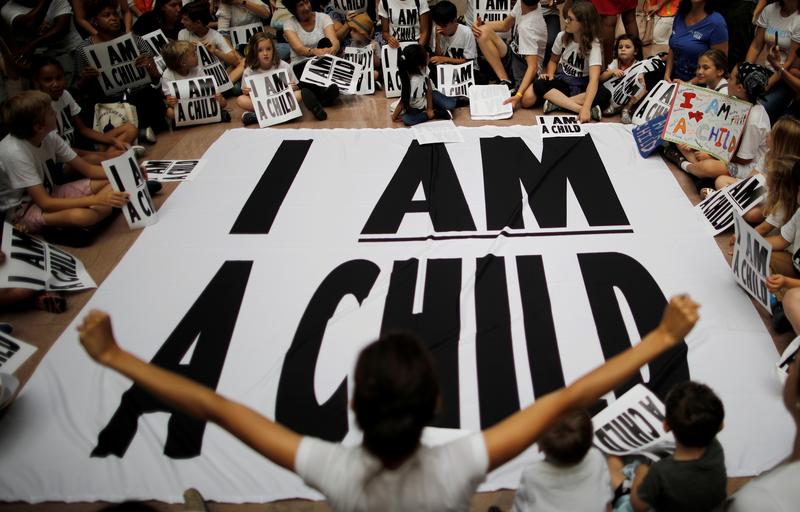 SAN DIEGO (Reuters) – A judge on Friday urged the U.S. government to focus on finding deported immigrant parents so it could reunite them with their children who remain in the United States following separation by officials at the U.S.-Mexico border in recent months.

FILE PHOTO: Children and family members take part in a sit-in following a march to mark “the court-ordered deadline for the Trump Administration to reunify thousands of families separated at the border, in Washington, U.S., July 26, 2018. REUTERS/Carlos Barria

The government had declared it had met a court-ordered deadline to reunite families separated during the Trump administration’s “zero tolerance policy” aimed at discouraging illegal immigration.

U.S. Judge Dana Sabraw said at a court hearing in San Diego the government deserved credit for the 1,820 children released from custody to a parent or sponsor. However, he urged officials to focus on the 711 children who remain separated after the government deemed their parents ineligible because they were deported, the government was unable to find them in the United States or the parent failed a background check.

Sabraw seemed most concerned during Friday’s hearing with allegations that 120 parents who the government said had waived their right to reunification might have misunderstood what they were signing, or felt coerced.

The government has said it has given every detained parent notice of their legal rights, and contact information for an attorney.

FILE PHOTO: A demonstrator holds a sign during a deportee “Suitcase Solidarity” march in support of those deported by ICE during the Trump presidency in Manhattan, New York, U.S., July 26, 2018. REUTERS/Shannon Stapleton

The parents were “effectively being tortured” by the knowledge they accidentally signed forms waiving the right to their child, Lee Gelernt, an attorney with the American Civil Liberties Union, said after the hearing.

The ACLU, which brought the lawsuit that led to Sabraw’s reunification order, asked Sabraw to halt deportations of parents who waived their reunification rights and to give parents a week after being reunited with their children before being deported.

Parents needed time to consider legal options, such as leaving the child in the United States to pursue asylum on their own, the ACLU said.

The government has said the parents already have adequate time to consider their rights, and granting the ACLU request was unwarranted.

“The administration continues to comply in good faith with the court’s requests while protecting the safety and well-being of all children in our care,” the Department of Homeland Security, which handles detained parents, said in a statement.

Sabraw took the request under advisement.

The parents have largely fled violence in Guatemala, Honduras and El Salvador, according to immigration advocates.

Rights groups on Friday criticized the government’s reunification efforts as confused and chaotic.

The government acknowledged that it lacked the technical capability to quickly provide information about children separated from their parents, according to a court filing on Thursday.

Advocates said they were struggling to find immigrant families to confirm they had been matched with their children.

“The deadline is not the finish line,” said Efrén Olivares of the Texas Civil Rights Project. “The work is only beginning and it will take many months.”

Non-profit groups were providing cash and transportation to help families get on their feet, Olivares said.

“The government has literally left these people to fend for themselves,” Olivares said on a call with reporters. “It confirms that when the government started separating families earlier this summer they didn’t have a plan to reunite them.”