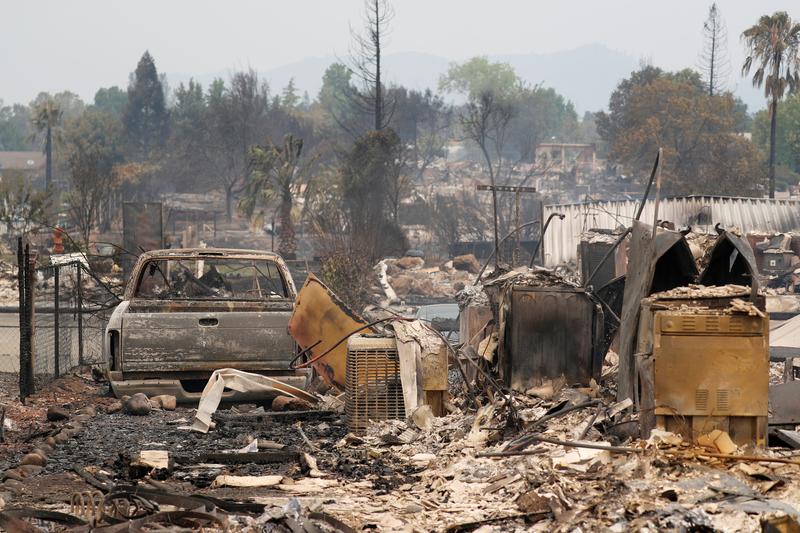 KESWICK, Calif (Reuters) – Before fire hit this Northern California community, summer was well under way. In driveways, speedboats lay on trailers waiting for their next spin on the nearby Sacramento River. Barbecues set up on lawns were poised for weekend grills with family.

But now, the boats, trailers, and Weber grills are twisted metal in the blackened front yards of homes that are no longer there, all blanketed by an eerie, thick haze. The carefree summer has ended for the town of Keswick.

A blackened landscape is shown from wildfire damage near Keswick, California, U.S., July 27, 2018. REUTERS/Alexandria Sage TPX IMAGES OF THE DAY

No one is here anymore in the community of about 450 people in California’s scenic Shasta-Trinity area that mostly burned to the ground on Thursday.

But signs of former life are everywhere – from the portable basketball court lying on its side in the middle of the street to the tiny children’s bike next to a tree trunk, to a Bambi lawn ornament still intact in the rubble of one home.

On Friday, a muddy brownish-red smog hung over Keswick, the noise of a helicopter overhead, as the ground still smoldered, lingering proof of the intensity of the Carr Fire that has killed two people and destroyed 500 structures.

The fire scorched 48,300 acres (19,500 hectares) as it ripped through parts of Shasta County, including Keswick, Whiskeytown and the west side of the city of Redding, displacing more than 38,000 people. [L1N1UN04O]

In one Keswick lot, the carcasses of a washing machine and dryer side by side were the only recognizable objects. In others, air conditioners seemed to have survived the best.

Just outside of Keswick, in an evacuated section of Redding, resident Ken Wing stood on the corner of a deserted street like a lone sentry. He watched the glowing red sun as it began to set, punctuated by plumes of smoke from the west.

Most of Wing’s neighbors cleared out on Thursday night, but the former firefighter decided to stay put.

“If everyone leaves, there’s no one here to put out spot fires,” said Wing. “I’m being the watchdog for my neighborhood.”