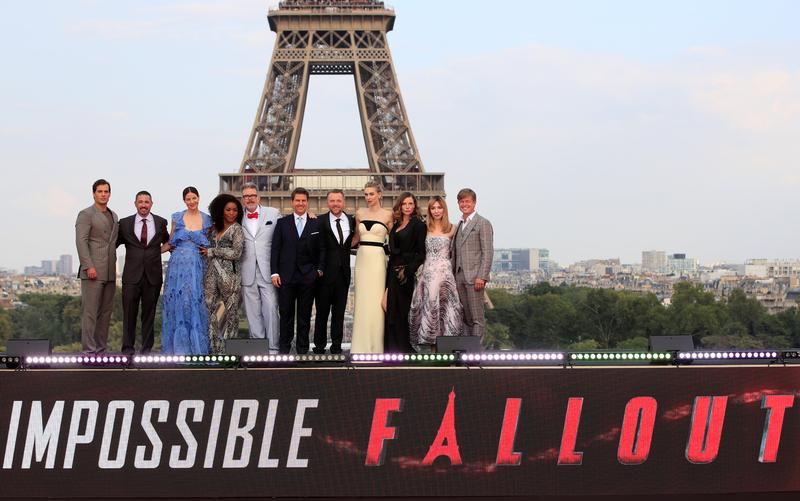 LOS ANGELES (Variety.com) – Tom Cruise’s latest, “Mission: Impossible — Fallout,” is on its way to a No. 1 debut at the North American box office with an estimated $59 million.

Should predictions hold, Paramount’s sixth installment of the franchise will finish on the upper end of recent forecasts, which ranged from $50 million to $65 million at 4,386 sites. It will come out ahead of its predecessor “Mission: Impossible — Rogue Nation,” which debuted to $55 million in 2015, and also mark a franchise best. “Rogue Nation” went on to gross $682 million worldwide.

Christopher McQuarrie directed “Mission: Impossible — Fallout,” after having directed “Rogue Nation.” He also wrote the script for “Fallout.” The movie is produced and financed by Paramount and partner Skydance Productions, headed by David Ellison. Cruise is a producer along with McQuarrie, J.J. Abrams and Jake Myers. Exec producers are Ellison, Dana Goldberg, and Don Granger.

Simon Pegg, Rebecca Ferguson, Ving Rhames, Alec Baldwin, Michelle Monaghan, and Sean Harris are reprising their roles from previous films, while Cavill, Vanessa Kirby, and Sian Brooke are joining the cast. The franchise is based on the TV series that ran from 1966 to 1973.

Sony’s “The Equalizer 2” should snag third place also in its second frame with $13.65 million. The Denzel Washington-starrer has earned $54 million domestically since its debut, and outstripped its predecessor in its opening weekend by $2 million.

Animated threequel “Hotel Transylvania 3: Summer Vacation” is hoping to bring in another $12.4 million in its third frame, which would bring its domestic total to around $119 million. The Sony film, which has outpaced its predecessors at the box office, continues to resonate with audiences, which have spent around $237 million on it globally.

“Teen Titans Go! to the Movies” should earn around $11 million in its debut this weekend. The Warner Bros. film features the voice talents of the original TV series cast for the main superheroes, along with Will Arnett as villain Slade, Kristen Bell as Jade Wilson, and Nicolas Cage as Superman. Series developers Michael Jelenic and Aaron Horvath wrote the script, with Peter Rida Michail and Horvath directing. The film has a Rotten Tomatoes score of 89% and received a B+ CinemaScore.

Elsewhere, Lionsgate’s “Blindspotting” grossed an estimated $468,000 on Friday at 523 North American locations in a limited opening. The film is predicted to earn $1.3 million through the weekend. Directed by Carlos Lopez Estrada, “Blindspotting” was written by and stars Rafael Casal and Daveed Diggs as two friends who struggle to stay on a peaceful path.