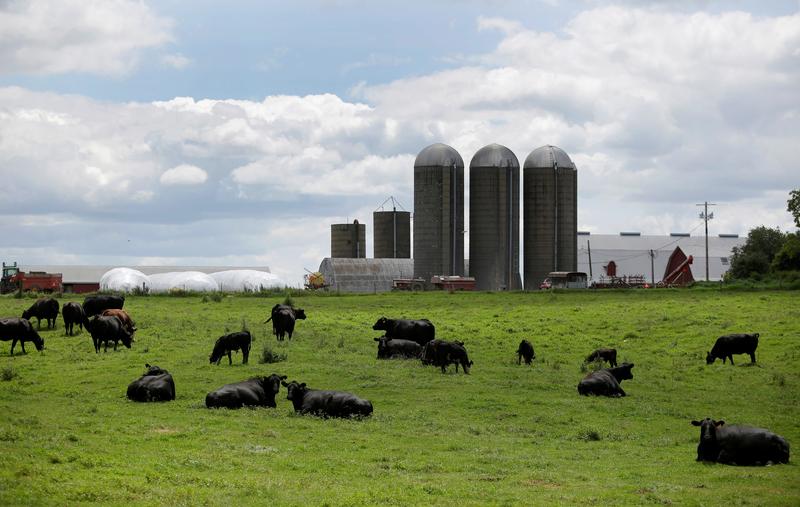 DUBUQUE, Iowa (Reuters) – Iowa farmers criticized President Donald Trump’s $12 billion farm aid package and worried about trade wars impacting their business, but many still turned out to support him on Thursday during a visit to the top corn-producing state.

Eugene Wiederholt, who rents out land used to produce soybeans in the town of Zwingle, said the farm assistance package announced Tuesday to help farmers weather lost markets and low prices from the trade disputes reminded him of welfare.

“I don’t want nothing to do with it,” he said at a public viewing area next to Dubuque’s airport, awaiting Trump. “It’s just not wholesome.”

The concern from Wiederholt, a supporter who said Trump “is one of us,” shows a dilemma facing many Republicans who have traditionally shunned aid and prefer free trade.

Many Republican lawmakers have spoken out against Trump’s trade policy and the aid.

“I hope President Trump’s trip to Iowa gives him a sense of urgency,” he said in a statement. “Farmers are depending on the President for a speedy resolution.”

China and other top U.S. trade partners zeroed in on American farmers with retaliatory tariffs after the Trump administration imposed duties on Chinese goods as well as steel and aluminum from the European Union, Canada and Mexico.

Rural and agricultural states supported Trump by wide margins in the 2016 election, and China has targeted them with tariffs on soybeans and other products. The aid package comes ahead of U.S. mid-term elections in November.

Trump may be taking on fights with too many trading partners at once, said Bob Weber, a corn farmer in nearby Bellevue, Iowa. But Weber still turned out to watch Trump, for whom he voted, land on Air Force One.

“What he’s doing is right but he might be doing too much at the same time,” Weber said.

Trump visited a community college in Peosta, Iowa, in Dubuque County, which flipped from supporting Barack Obama in 2012 to Trump in 2016.

Eleven people interviewed by Reuters who earn incomes from farming around Dubuque said they voted for Trump and continue to back him.

Still, BJ Reeg, a farmer in nearby Bellevue, worries that trade tensions have hurt prices for the soybeans he grows and meat he produces from cattle.

“This trade war thing, it has to be done,” Reeg said as he leaned on his silver pickup truck. “In the long run, it’s gonna be good, if a guy can hang on.”

Reeg said he was glad the Trump administration offered aid to farmers but worried it would not be enough.

“The whole farm industry is really in the gutter,” he said. “You take $12 billion and divide it by all the crops out here and it does not amount to much,” he said.

The largest emergency farm assistance announcement since 1998 will offer cash payments to farmers from a depression-era program, buy foods for food banks and other programs and aim to promote trade starting in September.

Reeg has contracts to sell about 60 percent of the soybeans he expects to harvest this autumn to global grain merchant Archer Daniels Midland Co and a local cooperative.

He plans to put the remainder of his harvest into storage because of low prices.

Trump spoke down the road from where Pat Merkes raises 80 dairy cows.

It is a tough time for dairy producers because milk prices have been low for more than a year, farmers said. They hope the government helps to open new markets for U.S. products.

“He’s not afraid to stand up to anybody,” Merkes said of Trump from atop a rusted red tractor. He also voted for the Republican.

Reporting by Tom Polansek; Editing by by Caroline Stauffer and Lisa Shumaker