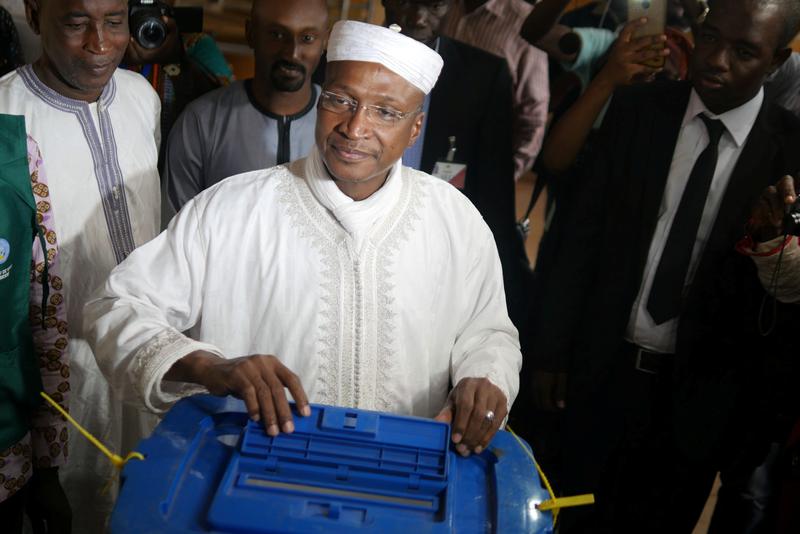 BAMAKO (Reuters) – Malians voted on Sunday to decide whether or not to give President Ibrahim Boubacar Keita a second term, amid widespread ethnic and jihadist violence that has dramatically worsened since he came to power five years ago.

Two dozen other candidates were contesting the presidency in a largely Saharan desert nation that has been fractured by a Tuareg rebellion and Islamist militancy across its north and central zones since the last poll in 2013.

Insecurity is such that in some parts of the country the vote will simply not happen, and the European Union observer mission urged the government on Saturday to publish a list of places that will be unable to vote, so as to quell suspicions by candidates of “fictitious polling stations.”

Eight million voters are enrolled. Voting mostly began as scheduled at polling stations in the capital Bamako at 8 a.m. (0800 GMT). Polls close at 6 p.m. Opposition candidates include businessmen, an astrophysicist, and just one woman.

The threat of violence was on the minds of voters, which could reduce turnout in a country where only 40 percent vote on average.

“I was scared to come and vote because of the insecurity, but I feel relieved because everything went well,” said 26-year-old housekeeper Mariam Cisse in the northern medieval Islamic city of Timbuktu, whose mud-walled mosques were tourist attractions until it became beset by Islamist militancy in 2012.

“I voted for Soumaila Cisse because I wanted power to change hands,” she said, referring to the 68-year-old candidate considered the most likely to beat the incumbent.

A Reuters witness said it was calm in Timbuktu on Sunday after days of unrest leading up to the polls.

One thousand km (600 miles) southwest in the capital Bamako, 32-year-old Hama Diallo just hoped for a safer future. “I hope the President-elect makes security a priority, without which nothing is possible”.

The head of the EU observer mission Cecile Kyenge said the mission had been informed of certain incidents in the north and center, on which she declined to elaborate, but otherwise the vote had started peacefully.

“I would urge caution. The opening is just a small part. It’s still too early to pronounce (on the process),” she said.

In the past three years, jihadist attacks have tripled and violent deaths doubled, according to civil society website Malilink. Islamists have spread from the north to the center and even targeted Bamako – as in 2015, when gunmen killed 20 people in a raid on a hotel – as well as Mali’s neighbors.

Islamist groups are seen as the biggest threat to Western interests in the Sahara. They have hit foreign targets and kidnapped scores of Westerners, and often holding them for years until they get multi-million dollar ransoms.

Growth has averaged five percent under Keita, and Mali’s key exports of gold and cotton have flourished, as have agricultural staples like rice, but insecurity has taken the shine off.

The United Nations peacekeeping mission to Mali has suffered more deaths than any in history, with some 170 peacekeepers killed, and human rights groups have raised the alarm over alleged executions by security forces. The Defence Ministry promised to investigate evidence linking them to mass graves.

Malian elections meanwhile have so far been peaceful. Yet opposition candidates have cried foul over alleged tampering of the electoral list, and Cisse told thousands of supporters on Friday the government was planning to steal the election.

While voting in his home town of Niafunke, near Timbuktu, he repeated his complaints, which may stir up anger should he lose.

“Every Malian must stay vigilant in the face of this attempt at electoral fraud. This historic election cannot be pilfered,” he said.

Keita rejected Cisse’s accusations as he voted in his home constituency of Sebinikro outside Bamako, a neighborhood of dirt roads, where chickens peck at piles of trash.

“This sterile polemic is perfectly useless. There has only ever been one electoral roll in Mali,” he told journalists, wearing trademark white kaftan and skull cap.

Western countries such as France, as well as the United Nations, are heaping pressure on all sides not to allow any dispute to boil over into violence.

On Saturday a spokesman for U.N. Secretary General Antonio Guterres urged “all political actors in Mali to commit to making this poll a peaceful, free and transparent process.”