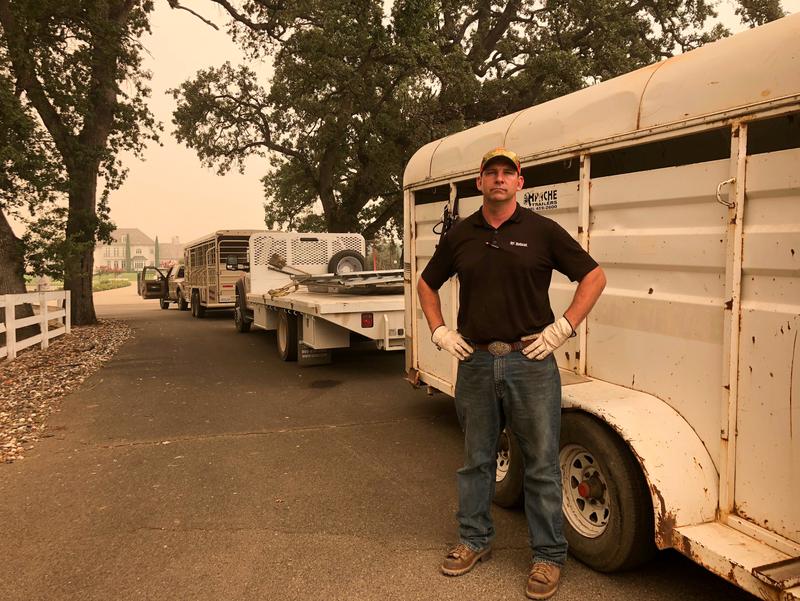 COTTONWOOD, Calif. (Reuters) – Tucker Zimmerman has gotten little sleep during the raging deadly fire in Shasta County, California. The retired U.S. Marine has rushed into a new battle, as a volunteer rescuing stranded horses and other livestock.

Tucker Zimmerman stands next to the trailer he has used to rescue scores of horses left behind in evacuated areas from the Carr fire in Shasta County, west of Redding, California, U.S.. July 28, 2018. REUTERS/Alexandria Sage

“I’m just the guy who moves stuff around,” he said modestly. The “stuff” he speaks of refers to the panicked horses and other livestock he wrangles out of harm’s way when they get left behind after the humans have fled.

With a large trailer borrowed from his job selling tractor equipment, Zimmerman has ventured daily into various evacuation zones just as homeowners threatened by the Carr Fire were rushing in the other direction.

On Saturday, he had just delivered to safety five horses he managed to capture in one newly evacuated area, before receiving a call to pick up others nearby.

The horses were being taken to stables, rodeo grounds and ranches whose owners have opened their property to the steady stream of livestock rescued by Zimmerman since Wednesday.

“He restored my faith in humanity,” said Noah Urban, an Oregon resident whose stranded 6-year-old horse named Bolt was saved by Zimmerman. The two connected through Facebook.

“You’re not just helping the animals, he’s helping people to alleviate their stress,” Urban said. “It would be like losing your children. If you had to leave them behind, I can’t even think about it.”

Zimmerman is not alone. Communicating through social media, text messages, radio and word-of-mouth, a network of animal lovers and animal-control authorities have banded together over the past few days to rescue as many stranded critters as possible.

At an outlet mall in nearby Anderson, the din of barking fills an empty storefront used as overflow housing for the animals of Haven Humane Society. Besides their usual charges seeking full-time homes, volunteers were accepting dogs and cats brought in by evacuated residents unable to care for their pets while displaced.

Four Pomeranians delivered in two armfuls sniffed their new cages, a fuzzy Newfoundland mix pawed at his cage, and a tabby cat huddled wide-eyed gazing at the commotion. Only a small green turtle delivered in a glass tank seemed unfazed.

Dan Fults, 47, and his wife had dropped off their Huskies, Balto and Lucian, to be cared for at the facility, an hour after fleeing their home. The couple were keeping their two cats and a parrot for the time being.

“Sure, I have valuable things in my home, but the pets obviously take priority,” Fults said.

Back at the Cottonwood Creek Ranch, Zimmerman was in his truck responding to the latest calls for assistance.

“When I was deployed (in the military), I couldn’t have animals, but I am an animal lover,” he said.

While Zimmerman has a proven talent for handling nervous horses, he doesn’t discriminate against two-legged creatures in need of help.

“I saved a guy named Matt. He was trying to water down his house” as flames erupted, Zimmerman recalled. “I said, ‘Let’s go!’”