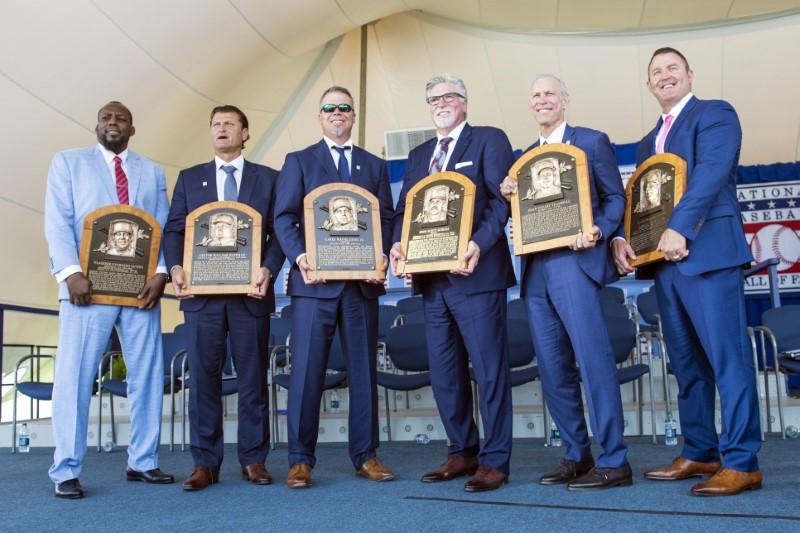 Six players reached the pinnacle of their illustrious careers when they joined the Baseball Hall of Fame during a sun-splashed ceremony Sunday afternoon in Cooperstown, N.Y.

Four hitters — Chipper Jones, Vladimir Guerrero, Jim Thome and Alan Trammell — joined the Class of 2018 in front of fans wearing jerseys and hats from the teams they represented. The foursome was joined by two pitchers — Trevor Hoffman and Jack Morris — to complete the talent-laden, six-member class.

More than 50 returning Hall of Famers attended the ceremony, which capped a weeklong celebration in the small town in upstate New York. The newest inductees brought the number of all-time Hall of Famers to 323.

Jones’ eyes watered as he watched a video showing highlights from his 19-year career with the Atlanta Braves. He was a .303 lifetime hitter with 2,726 hits, 468 home runs and 1,623 RBIs, all with the Braves.

The switch-hitter spoke about his childhood in Pierson, Fla., where he fell in love with the game. He spoke in front of family members including his parents and his nine-month pregnant wife, Taylor, who is due Monday.

“Taylor is due any minute with our second boy,” Jones said with a smile after thanking his wife for her support. “We decided to name him Cooper in honor of this occasion.”

Guerrero was a .318 lifetime hitter during a prolific 16-year career spent mostly with the Montreal Expos and Los Angeles Angels. He slugged 449 home runs with 1,496 RBIs and stood out with his rocket arm in right field.

Guerrero became the first position player from the Dominican Republic to be inducted into the Hall of Fame. His plaque features an Angels hat, which he wore during his 2004 American League MVP campaign.

Thome’s 15-year-old daughter, Lila, sang the national anthem on stage to kick off the Hall of Fame ceremony. The intimidating slugger who stands 6-foot-4 and weighs 250 pounds quickly transformed into a teary-eyed father.

When it was his turn to speak, Thome thanked baseball fans for supporting him throughout his career and for traveling from across the country to be part of the ceremony.

“It was the pleasure of my life to play hard for you for 22 years,” Thome said to cheering fans. “The Hall of Fame is an amazing place, the intersection of the game’s past and present. …

“It’s the same dream that so many kids have of one day getting to the big leagues. I never forgot that dream, even after I became a major league player, because I could always see the dream’s reflection in the face of a kid in the stands.”

San Diego Padres fans lined the lawn to support Hoffman, who became the first pitcher in major league history to reach 500 saves — and then 600 saves. He finished his career with 601 saves and a 2.87 ERA while limiting opponents to a .211 batting average.

“Fifteen years in one spot, and that spot is San Diego?” Hoffman said. “Jackpot.”

Trammell and Morris drew thousands of Detroit Tigers fans to Cooperstown for the ceremony. Both players were elected through the Hall of Fame’s Veterans Committee.

In 20 years from 1977 to 1996, Trammell hit .285 with 185 home runs and 1,003 RBIs, playing primarily shortstop throughout his career. He was named as the 1984 World Series’ Most Valuable Player and won four Gold Gloves alongside second baseman Lou Whitaker.

“Lou and I were called up to the big leagues from Double-A on the same day,” Trammell said as Whitaker listened in the crowd. “We both got hits in our first major league at-bat off the same pitcher, Reggie Cleveland. … For all those years, it was ‘Lou and Tram.’ Lou, it was an honor and a pleasure to have played alongside you for all those years, and my hope is someday you’ll be up here, as well.”

Morris, now 63, is the oldest member of the Class of 2018. The right-hander went 254-186 with a 3.90 ERA while racking up 2,478 strikeouts. He made a name as a big-game pitcher, winning three World Series titles and earning 1991 World Series MVP honors for his performance with the Minnesota Twins.

“Mom, I know you’re smiling down on this today,” he said.