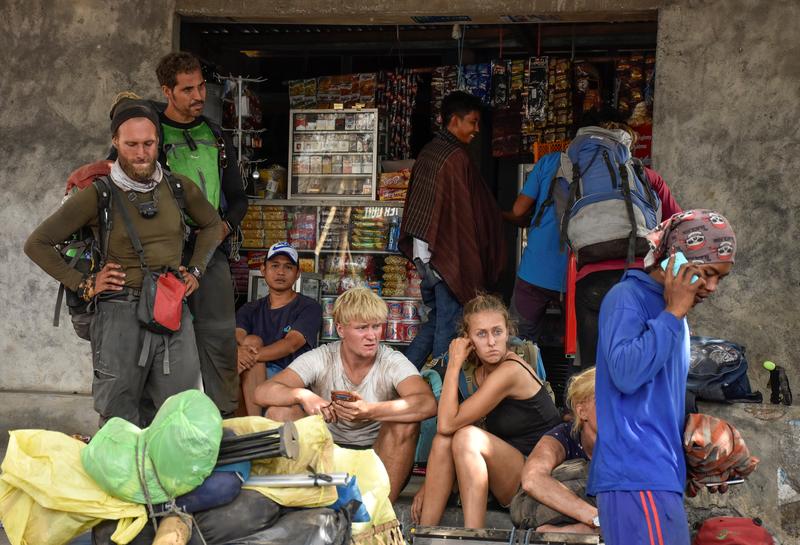 JAKARTA (Reuters) – Nearly 700 trekkers headed down Mount Rinjani on Indonesia’s tourist island of Lombok on Monday, a day after a powerful earthquake of magnitude 6.4 terrified the climbers as boulders tumbled down the slopes of the volcano.

Officials said the death toll from Sunday’s earthquake, which was centered on the northern part of Lombok, but was also felt on the resort island of Bali to the west, stood at 16. More than 335 people were injured, many by collapsing buildings.

“I thought I was going to die,” said John Robyn Buenavista, a 23-year-old American, who was at the summit when the quake hit. “I was clinging to the ground. It felt like it lasted forever. I saw people fall off, but it’s a blur.”

The national park authority said on Monday that a key route to the peak of the 3,726-metre (12,224-foot) volcano had been cleared, and a helicopter was dropping supplies to others still picking their way to safety.

An estimated 689 people were still on Rinjani, said Sutopo Purwo Nugroho, a spokesman of the national disaster mitigation agency.

“Hundreds of trekkers in the crater in climbing areas couldn’t come down when they wanted to, because the paths were covered by debris from landslides and there were fears of subsequent landslides,” Sutopo told a news conference.

As many as 820 people – most of them foreigners – were on Mount Rinjani when the quake struck, making two trails impassable, Sutopo said on Twitter late on Sunday.

Thais formed the largest group among the 637 foreigners who registered to climb the mountain on July 27 and 28, making up 337, with French, Dutch and Spanish the next-biggest contingents.

Mount Rinjani National Park said in a Twitter message on Monday that a key route, Senaru, had been reopened for people to come down.

Authorities expected 500 trekkers to arrive at the foot of the mountain by 5 p.m, said Agung Pramuja, a disaster mitigation official in Indonesia’s region of West Nusa Tenggara.

A landslide triggered by the quake trapped a group of six at the crater lake of Indonesia’s second-highest volcano, he added, with about 100 army, police and other rescuers working to get people down, while helicopters scoured for those still trapped.

Trekkers typically take two days and a night to get to the crater rim of Rinjani and back down again, the national park says on its website.

Buenavista, the U.S. tourist, said he was about to take some dawn photographs at the crater edge when the earthquake struck, and his immediate thought was that the volcano had erupted.

“I started running to the trail,” he told Reuters by telephone from the Gili Islands, off Lombok’s northwest coast, where he headed after a seven-hour trek to the foot of the peak.

“At one point, I saw people with half of their bodies stuck in the rocks and I just couldn’t move. I felt paralyzed and stopped moving. The guides were screaming, ‘Don’t die, don’t die.’ One of the guides had to shake me and take me by the hand. He told me that I had to go, and that they would be okay.”

(For a map showing the epicenter of the quake, click – tmsnrt.rs/2K6XfYN)

The Lombok quake struck at 6:47 a.m. (2247 GMT on Saturday) at a shallow depth of 4.35 miles (7 km) that amplified its effect. Officials said 280 aftershocks followed the initial quake.

Earthquakes are common in Indonesia, which is located on the seismically active “Ring of Fire” on the rim of the Pacific Ocean.