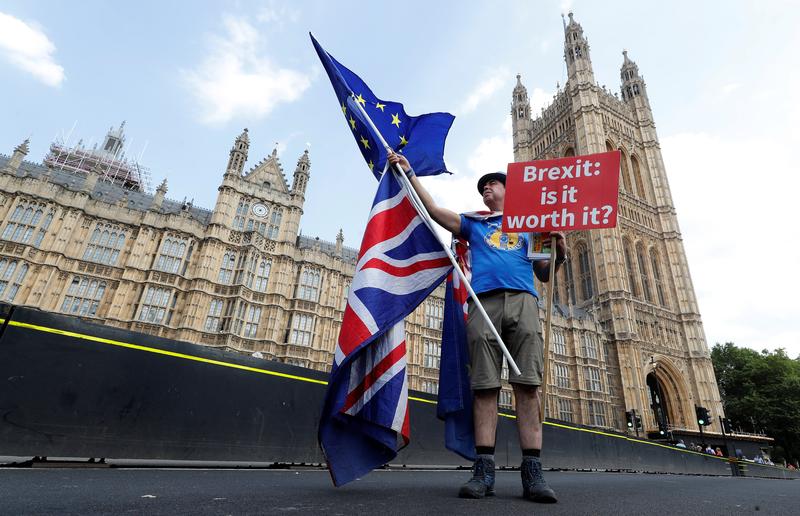 LONDON (Reuters) – Two-thirds of Britons now think the government will end up with a bad deal when Britain leaves the European Union early next year, and half want the chance to vote on what happens next, Sky News reported on Monday, citing its own poll.

With less than eight months until Britain is due to leave the EU, Prime Minister Theresa May has yet to find a proposal to maintain economic ties with the bloc that pleases both sides of her divided party and is acceptable to negotiators in Brussels.

The Sky poll said 65 percent of British voters thought the government would end up with a bad deal – an increase of 15 points from March – and half support a referendum to choose between leaving with a deal, leaving without a deal or staying in the EU. The poll indicated 40 percent opposed such a vote, while 10 percent did not know.

When asked to choose between three options – May’s deal, a no deal or staying in the EU – 48 percent said they would prefer to stay in the EU, 27 percent wanted to leave with no deal and 13 percent would opt for the government’s deal.

Sky Data interviewed a nationally representative sample of 1,466 Sky customers online between July 20 and 23. Data are weighted to the profile of the population.

The shift in public opinion comes as May has stepped up planning for a so called “no-deal” Brexit that would see the world’s fifth largest economy crash out of the EU on March 29, 2019 without a trade agreement.

A separate poll on Friday suggested that the proportion of voters who favour a referendum on the final terms of any Brexit deal had overtaken those who do not for the first time.

May has repeatedly ruled out holding another public vote on Brexit, saying the public spoke at a June 23, 2016, referendum, in which 51.9 percent of the votes cast backed leaving the EU while 48.1 percent backed staying.

Her main opponents in parliament, the Labour Party, are also not advocating a second referendum, meaning that, despite growing support and a vocal campaign for another vote, there is no obvious path for one to take place.

However, the potential for major political upheaval remains, with May’s minority government facing a series of make-or-break moments in the Brexit process over coming months.

She must find a way to strike a deal with the EU, which has already rejected her preferred plan on trade, then sell that deal to her deeply divided Conservative Party, before putting it to a vote in parliament. Failure at any of those three hurdles could cost her her job.

Earlier this month, the government set out in detail for the first time what kind of trading arrangement it wants with the EU after leaving the bloc, triggering a political crisis in which two senior ministers resigned in protest, saying May was watering down Brexit.

Since March, the proportion of those satisfied with May’s performance has fallen to 24 percent, down 17 percentage points, the Sky poll showed.